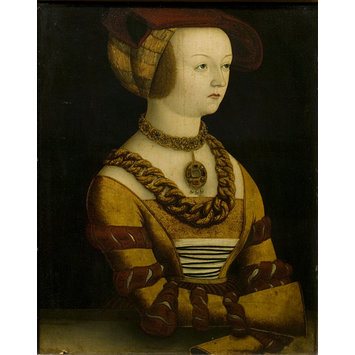 This work has been reattributed numerous times throughout its life at the V&A. First acquired from the Soulages Collection, the painting was thought to be a sixteenth century Swiss painting of the Basle School. It was later attributed to the manner of Lucas Cranach the Elder and his workshop, before it was finally recognised as a nineteenth century imitation of a sixteenth century work. The portrait is similar in style and execution to the work of Cranach the Elder, using the same medium and technique, as well as depicting the sitter in the fashions of a sixteenth century Saxon noblewoman. While still unattributed, copying the work of the Old Masters for study was normal practice in the mid-1800s, whether or not copyists intended these works to be sold as originals is unknown.

A Lady in Sixteenth Century Dress was purchased, among other items held by the V&A, from the collection of Jules Soulages (1803-1857), a French collector of medieval and Renaissance decorative arts. This painting was featured in the 1857 Art Treasures Exhibition in Manchester, England as attributed to the ‘School of Basle’ [sic] and was thought to date from the sixteenth century. In 1865 it was acquired by the Museum under this attribution but was subsequently re-attributed to ‘Manner of Lucas Cranach the Elder (1472-1553).

The materials and technique used by the artist of Museum No. 771:1-1865 are similar to those known to have been employed by Cranach the Elder. The painting is unlikely to be from the hand of German master himself or from his workshop, but is nonetheless similar to his technique and subject matter. Cranach is known for working in oil paint on lime wood panels, the same medium and support found in this work. The use of these materials in the nineteenth century, when painting on panel was less common than on canvas, could be interpreted as a salute to Cranach, an attempt by an artist to better understand the techniques used by Cranach or as a deliberate attempt to falsify his work.

IN the mid-twentieth century, the dating of this work to the sixteenth century was challenged upon closer examination and the painting was determined to be a nineteenth century imitation. According to notes in the Departmental Object File, in September 1969, the was work x-rayed and it is noted that the images ‘did not reveal any underpaint in the area of the apparent pentimenti nor did they provide an explanation for the raised oblong areas on the left and right, 1/3 of the way down’. According to notes in the Departmental Object File, in early 1915, Eric MacLagan, (1879–1951), who later became Director of the V&A, suggested that A Lady in Sixteenth Century Dress could be attributed to German artist Franz Wolfgang Rohrich (1787-1834). There is some question as to whether Rohrich’s works were intended as studies or copies after Cranach’s style or were deliberate forgeries. A similar issue was raised in relation to Sophie (1464-1512) of Poland and Friedrich I (1460-1536), Margrave of Brandenberg-Ansbach, both paintings in the Metropolitan Museum of Art, New York. According to their catalogue entries, ‘The collector and art historian Atanazy Raczyński, who knew the artist personally and owned one of the pseudo-Cranachs, claimed that deception was never Rohrich’s aim. Instead, according to Raczyński, it was certain dishonest dealers who passed off the paintings as sixteenth-century originals.’ Rohrich studied at the Academy of Fine Arts in Munich from 1809-1812 and would have been exposed to German and Swiss Masters, like Cranach. According to the Met, some of his works have a ‘fanciful monogram’, although this work seems to lack that detail.

The painting reflects the time in which Cranach would have been working through the style of the sitter’s dress. The Saxon style, with its slashed sleeves, laced bodice and wide, square neck are indicative of the costume of a patrician or noblewoman in Germany during the mid-sixteenth century. Her intricate and weighty-looking jewellery indicates an elite position within society, as these gems would have been expensive to produce. Her serene countenance and lack of eye contact is also in keeping with Cranach’s style, and is also present in other works attributed to Rohrich, as mentioned above. The Departmental Object File also notes the costume’s similarity to reproductions of works by Wolfgang Krodel the Elder (1500-1561), but does not mention any specific work to which we can compare. Krodel the Elder was of Swiss descent and other works attributed to him do resemble a similar style to the V&A’s painting and, if seen by Rohrich during his studies alongside Cranach’s, may have significantly influenced his artistic style.

Oil painting, 'Portrait of a Lady in a Costume of ca. 1530', style of Lucas Cranach the elder, 19th century 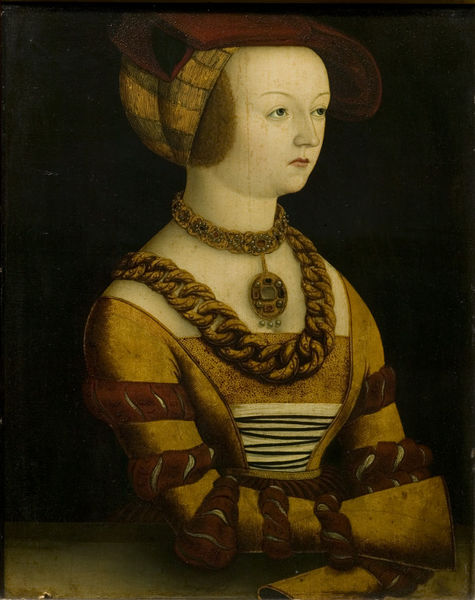