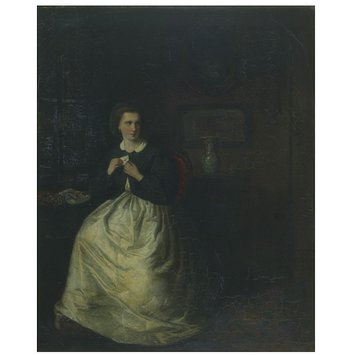 Joseph de Groot (1828-1899) was born in Amsterdam, studied in the Rijsakademie van beeldende kunsten and rapidly specialised in genre scenes reminiscent of the Golden Age's genre painting. He was a member of the art society Arti and Amicitiae, founded in 1839 and that still exists nowadays.

This painting is a typical example of Joseph de Groot's genre painting for which he is best known. This painting took over the compositional scheme of the Golden Age's genre imagery without including any symbolic meaning. The artist only shows us a moment of intimacy with this elegantly lady set in a domestic interior, who is hiding a love letter (as the title suggests) under her blouse.

An elegantly dressed woman in a domestic interior: she is hiding a letter under her blouse, looking towards the right.

Sold at Christie's, 18 April 1867, lot 6, for £8
Bequeathed by John M. Parsons, 1870
John Meeson Parsons (1798-1870), art collector, was born in Newport, Shropshire. He later settled in London, and became a member of the stock exchange. His interest in railways led to his election as an associate of the Institution of Civil Engineers in 1839, and he was director or chairman of two railway companies between 1843 and 1848. Much of his time however was spent collecting pictures and works of art. In his will he offered his collection of mostly German and Dutch schools to the National Gallery (which selected only three works) and to the Department of Science and Art at South Kensington, later the Victoria and Albert Museum. The South Kensington Museum acquired ninety-two oil paintings and forty-seven watercolours. A number of engravings were also left to the British Museum.

Historical significance: This work is typical of de Groot's continuation of Dutch 17th century genre imagery. He specialised in interior scenes, although he also executed a few landscapes in the manner of Jan van Goyen. The billet doux depicts an elegant young woman hiding a letter under her blouse, a subject often encountered in Dutch 17th century genre painting, by such artists as Frans (1635-1681) and Willem van Mieris (1662-1747). The 'billet doux' stands, in French, for 'love letter': the subject turns on the intimate proximity of the letter to the woman's heart, echoing contemporary Victorian imagery.

Most of de Groot's output works do not have a moral meaning, and represent modest people involved in domestic activities, such as in L'Alphabet, sold Lombrail & Teucquam, 29th Sep. 2000, Lot 79, or the Shoemaker, formerly Kunsthandel R Polak, The Hague.

Joseph de Groot (1828-1899) was born in Amsterdam and studied in the Rijsakademie van beeldende kunsten. His genre scenes are reminiscent of those of the Golden Age. He was a member of the art society Arti and Amicitiae, founded in 1839, which still exists.

The great tradition of the Golden Age constituted a real burden for Dutch painters in the 19th century, and many continued to paint in the style of the masters of the 17th century. The arrival of the Barbizon school gave new life to a tradition that had been stagnating. 19th-century Dutch paintings were popular with British collectors, including James Staats Forbes (1823-1904), Alexander Young and Sir John Charles Frederic Sigismund Day (1826-1908). 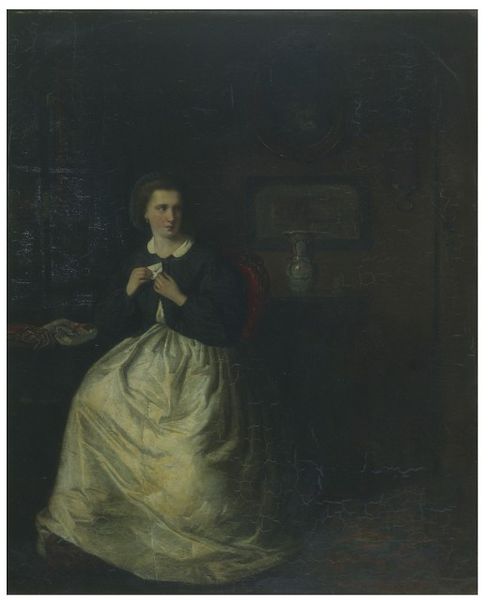