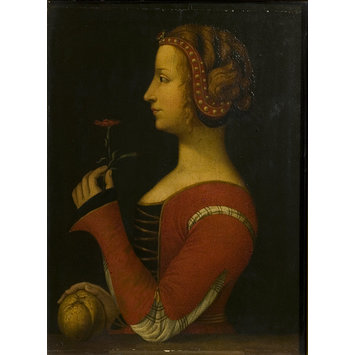 This painting may be a 17th-century copy of a lost original which was probably painted by Leonardo or one of his many followers. It shows a female profile portrait wearing a late 15th-century Florentine costume and holding a carnation and an apple, which are usually interpreted as nuptial attributes.

Set against a dark neutral background, a female profile bust facing left, holding a carnation in one hand and an apple in the other.

Historical significance: In 1856 J. C. Robinson described this work as 'a 17th century pasticcio or copy from an early Italian work' and this judgment still stands. The original appears to have been a North Italian work of ca. 1500 somewhat like the portraits of Ambrogio de Predis and other followers of Leonardo.

The tradition that this work represented Petrarch's Laura (supposedly 1307-48) is an old one. There is another version in the Musée Calvet, Avignon (Prince d'Essling and E. Müntz, Pétrarque, 1902, repr. p. 79) and an engraving, in reverse, in Tommasini, Petrarcha redivivus, 1650, p. 106. 764-1865 could be a copy of the Avignon version, but equally they could both be derived from the same model, now lost. The fact that it was mounted on walnut panel suggests that it may have been in Southern France at the time. The apple was a symbol of love and fruitfulness - and hence an attribute of Venus - in Classical Antiquity and in the Renaissance. The carnation is usually interpreted as a symbol of betrothal when it appears on 15th and 16th century portraits (G. de Tervarent, Attributs et symboles dans l'art profane, ii, 1959, col. 288 f.).

The long nose, fleshy lips and globular eyes of the sitter and play between light and shade are reminiscent of works by Leonardo da Vinci, such as the Belle Ferroniere in the Louvre. The costume, with its finestrella sleeves, which allow the chemise to pass through the dress, and the head-dress revealing the curly hair, are analogous with those found in frescoes of the late 15th century by Domenico Ghirlandaio (1449-1494) in Santa Maria Novella, Florence.

In his major work, Rerum Vulgarium Fragmenta, commonly known as Canzoniere, the Florentine poet Petrarch (1304-1374) wrote of his lost love Laura, whose (lost) portrait by Simone Martini (ca. 1284-1344) is mentioned in two poems. Petrarch's description became a primary justification for female portraiture, and is frequently alluded to in late fifteenth and sixteenth century Italian sources.

Leonardo da Vinci (1452-1519) was trained in Florence, in the workshop of Andrea del Verrochio, and was a member of the Compagnia di S Luca in Florence as early as 1472. His reputation grew rapidly and he produced paintings and numerous drawings, including designs for sculptures, architecture and military and civil engineering, as well as studies of anatomy and the natural scieneces. He was in Milan from ca. 1482 to 1499, returning to Florence in 1500, where he remained until 1508. He returned to Milan from 1508-13, and was then in Rome, where he worked for Giuliano de' Medici, Duc de Nemours. Some time between 1516-17, Leonardo travelled to France and entered the service of Francis I at Clos-Lucé, Amboise, where he died in 1519. Leonardo had a considerable influence on the art of his time. His pupils, included Andrea Solario (ca. 1465-1524), Bernardino Luini (ca. 1480-ca. 1532), Cesare da Sesto (1477-1523), Francesco Melzi (1491/93-ca.1570), Ambrogio de Predis (ca. 1455-after 1508) and Giovanni Antonio Boltraffio (1466/67-1516). His reputation as an artist and universal thinker is immense.

In his encyclopaedic Historia Naturalis, the ancient Roman author Pliny the Elder described the origins of painting as emerging from the outlining of a man's projected shadow in profile. In the ancient period, profile portraits were found primarily on imperial coins. With the rediscovery, and increasing interest, in the Antique during the early Renaissance, artists and craftsmen looked back to this ancient tradition to create medals depicting profile portraits on the obverse, with personal devise on the reverse, in order to commemorate and celebrate the sitter. Over time these profile portraits were depicted on panels and canvas, progressively evolving towards three-quarter, and eventually frontal, portraits. These portraits especially aimed to represent an idealised image. 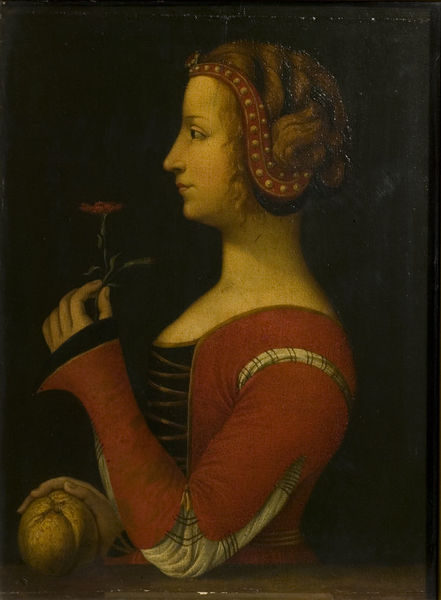