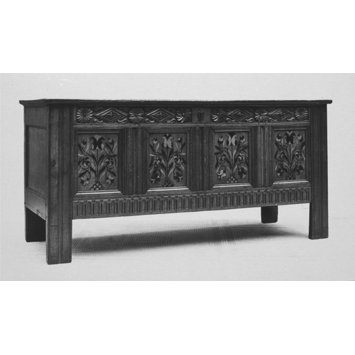 The four main uprights continue below the chest to create tall feet. The sides show single plain panels of oak (grain horizontal) between undecorated stiles and rails. On the front of the chest the stiles and muntins (the short vertical framed sections between the panels) are moulded with a plane. The lower rail is carved with gadrooning and the upper rail is carved with two panels flanking a plain section, which was left for a lock plate (not used originally). The present small key escutcheon is heart shaped, in brass. Each of the carved panels shows 2 lozenge motifs between 3 daisy-like flower heads. The spandrels of the lozenges are filled with comma-like shapes.

The top is of 3 tongue-and-grooved boards of oak with a mitred frame on three sides, with a moulded profile. The underside of the lid shows two chamfered cross batons of oak (possibly original but with later screw fixings). The Iron strap hinges are black japanned and probably an addition but are covered with beige paper, so difficult to access.

The back is of frame and panel construction with 3 muntins separating 4 panels.

'Coffer. Carved and Inlaid Oak. Early 17th Century. This coffer is of the framed construction which first made its appearance in the sixteenth century. It consists of four panels tenoned and mortised into the stiles and rails, and secured by wooden pegs. The panels on the front of the chest have an applied moulding all round, but those at each end are moulded on three sides only and chamfered below as in the previous example.

The frieze rail is ornamented with alternate rosettes of flower shapes and diamonds; the panels are inlaid with holly and bog-oak in a formalized pattern of leaves and flowers, each panel being similar in general idea and design, but differing in minor details. The bottom rail in this particular object is decorated with a thumb moulding.'

'We have already seen an example on page 32 of a sixteenth-century Italian sideboard or coffer. It was the endeavour to copy this work which resulted in such pieces of furniture as that shown on Plate 10. Standing about 3 feet high, these copious coffers would hold enough linen for a complete household. The timbers are all of them heavy, and the moulded rails between the inlaid panels are of considerable width. The contrast of colour in the inlaid panels is not nearly so strong as a black-and-white drawing would lead one to suppose, the boxwood having toned down to a rich golden colour. The fluted rail below and the somewhat crudly carved top rail all have their prototypes in the ornamentation of the Italian coffer already described and illustrated.' 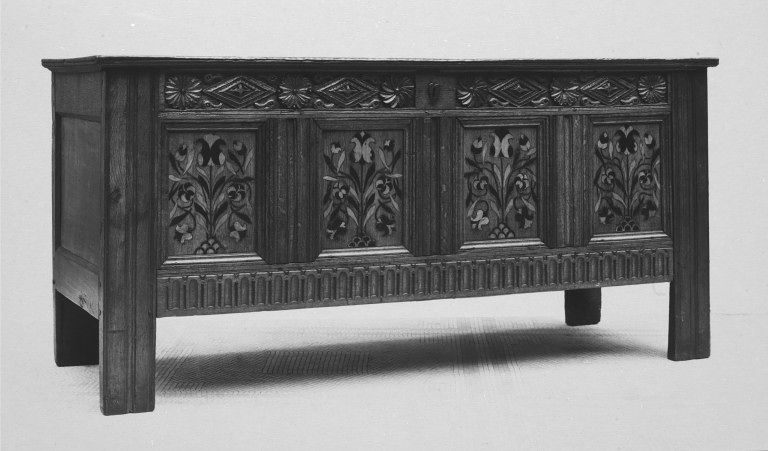