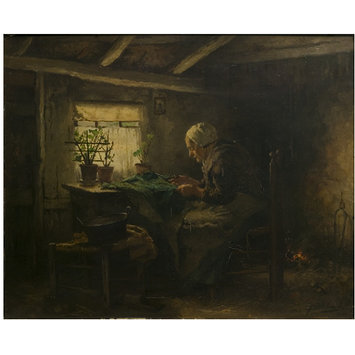 Interior with an Old Lady Seated and Cutting Cloth

Johannes Weiland (1856-1909) was born in Vlaardingen, a Dutch city not far from Rotterdam. He worked there until 1879 and settled definitively in Rotterdam in 1900. He trained at the Academie voor Beelende Kunsten in Rotterdam where he became a teacher in 1879. He was also a member of the Pulchri Studio and the Aesthetic Society.

This painting is a good example of Johannes Weiland's oeuvre, a painter that specialised in genre painting showing humble Dutch people involved in their daily activities. The pictorial treatment goes back to The Hague school's experiments while the genre painting was a well exploited category among Dutch artists during the second half of the 19th century.

An old lady is seated at a table before a small window; on the table are three pots of plants and a cloth that she is cutting; a stool with a basin and a cloth on the top is at her left while a fireplace with a small brazier is behind her.

'J. Weiland 98'
Signed and dated by the artist, lower right

Historical significance: Johannes Weiland specialised in genre scenes of Dutch peasants. The painting of 1898 shows an old woman in a modest domestic interior, cutting cloth at a table by a window. She wears typical Dutch headgear and an apron, and a sabot lies on the floor before her. Similar compositions by Weiland include The lesson, sold Sotheby's Amsterdam 5 Nov. 1996, and Monk in a cell, Instituut Collectie Nederland, Amsterdam (Inv. E486).

Johannes Weiland (1856-1909) was born in Vlaardingen, near Rotterdam and trained at the Academie voor Beelende Kunsten in Rotterdam, where he later taught. He was a member of the Pulchri Studio and of the Aesthetic Society. He developed a broken brushwork to represent the fall of light into dark interiors, and his work resembles that of the Hague School. His dark and rather monochrome palette is also reminiscent of 17th-century genre paintings by such artists as Adriaen Brouwer (1605/06-1638) and Adriaen van Ostade (1610-1685).

The great tradition of the Golden Age constituted a real burden for the new generation of Dutch painters. The arrival of the Barbizon school gave new life to a tradition that was stagnating. From the 1870s the painters of the Hague School such as Hendrik Mesdag, Anton Mauve, Jozef Israëls and Jacob Maris produced sketchy and rather monochrome genre scenes which initially puzzled art critics who nicknamed this new movement the 'grey school'. Dutch paintings were popular in Britain towards the end of the 19th cventuiry, and were collected on a considerable scale by James Staats Forbes (1823-1904), Alexander Young and Sir John Charles Frederic Sigismund Day (1826-1908). 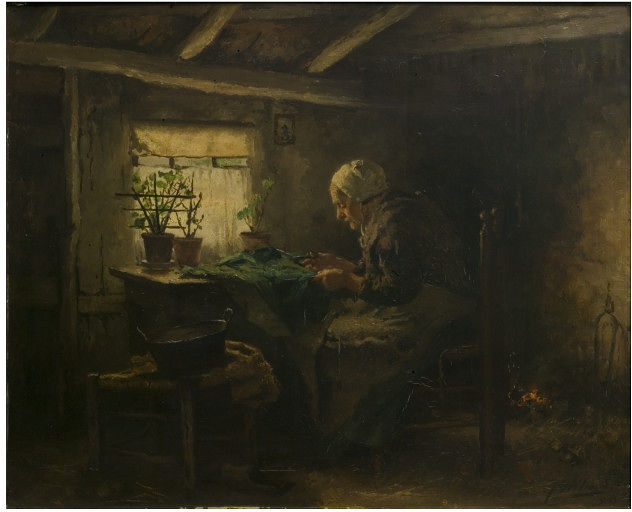