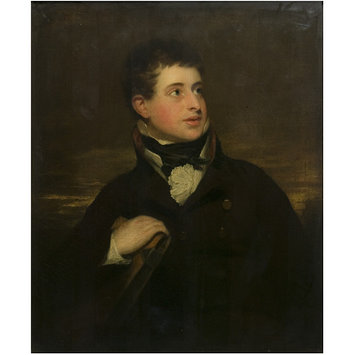 The painting was bequeathed by Miss.E.A Chilcote in 1918. No other paintings were given to the Museum as part of this bequest. The painting had come to Miss E. A. Chilcote by descent, her mother being Juliana Willet Hurlstone.

Historical significance: Sir William Beechey, RA (1753-1839), portrait painter. Born in Burford, Oxfordshire, William Beechey was brought up by his uncle, a solicitor, and began training as a lawyer. He entered the RA schools in 1774 where he was a pupil of Johan Zoffany (1733-1810), who worked predominately theatrical painting and portraits. In a successful career spanning over 60 years, Beechey exhibited 372 works at the Royal Academy, between 1776 and 1839, and 32 at the British Institute between 1806 and 1836. From 1782 to 1787 he worked as a portrait painter in Norwich. He was elected ARA in 1793 and RA in 1798. Beechey worked creating fashionable portraits and sound likeness of considerable variety. Appointed portrait painter to Queen Charlotte in 1793 and knighted in 1798, his portraits rivalled those of John Hoppner (1758-1810). However both Beechey and Hoppner were superseded by the most popular portrait painter of the day, Sir Thomas Lawrence (1769-1830).

This half-length portrait shows the sitter against a dark sky. While acting as a neutral background the sky seems to anticipate a storm, creating a sense of drama. This atmosphere is continued in the pose of Frederick Yeates Hurlstone, who turns his head and looks up to the spectator’s right whilst resting his right hand upon a book. The combination of placing the sitter in a dramatic pose in front of an ominous sky occurs frequently in portraits from the turn of the nineteenth century. It can be seen for example in the Prince Regent (later George IV) of 1815 by Thomas Lawrence (Sotherbys sale 16/11/88, lot 73, see Wilson, 1991) and in Beechey’s John Granville of 1790-95 in the Detroit Institute of Fine Arts.

Frederick Yeates Hurlstone is shown wearing a dark brown coat with a turned up collar, shirt with a white collar and frill and a black stock. The inside of the coat collar is lined with red fabric. The sitter is shaven with short unkempt hair. The hairstyle and dress of the sitter date this portrait to the 1820s, when Frederick Yeates Hurlstone was still training with William Beechey. There is a known copy of this painting by D.G. Wells (1881-1973) which is documented as hanging on the staircase of the RBA (Royal Society of British Artists), Suffolk Street in 1924 (see note on object file). 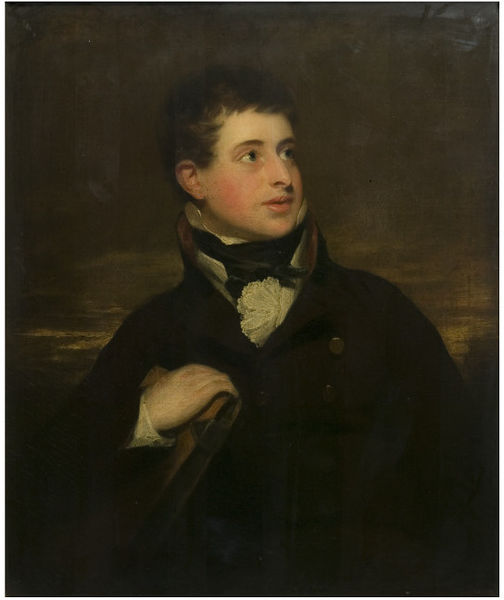