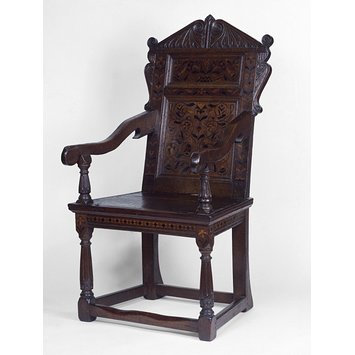 The basic design of a joined armchair with panel-back appeared in the 16th century, but developed many regional variants during the 17th century. The incorporation of inlay decoration, as seen on this chair, was first fashionable around 1580-1610, but seems to have become particularly popular some decades later in the Dales area of Yorkshire, where the cloth industry thrived around Leeds, Bradford and Halifax. Features of this chair which suggest a Yorkshire origin are the characteristic undulating arm, and the double-scrolled pediment cresting which continue the crest design but are attached separately to the back uprights. The decoration of flowers, leaves and birds is inlaid, whereby contrasting motifs sawn from thin sheets of wood are inset and glued into recesses chiselled into the oak ground. This chair underwent fairly heavy restoration before it came to the Museum, probably while it was in the collection of Charles H. Marshall of East Retford, a notable collector of early British furniture.

This object is on loan to Sewerby Hall.

Design
Oak arm-chair with carved crest and 'ears', turned and fluted front legs, inlaid back, and front and side rails. The panelled back consists of a small rectangular, one-piece panel set horizontally above a large upright rectangular panel consisting of two vertically-grained boards. The panels, and the back uprights and mid rail (on their front faces) are inlaid with floral scrollwork and birds, in holly(?), cherry(?), bog-oak(?) and probably other stained woods. The back is surmounted by a voluted cresting carved with acanthus, and at each side is a 'ear-piece' with similar decoration. The front and side rails (with applied moulding) are inlaid with a band of brown and black diamonds. Below the seat, the 'knees' of both front legs are inlaid on the front and sides with a flower.

Construction
Joined and pegged, with full-height back uprights (repaired at the feet), and mid- and lower rails. The one-piece cresting is mortised onto the back uprights, onto which are nailed or pegged the carved 'ears'. The sloping, carved arms are tenoned into the back uprights, and mortised onto turned and fluted prolongations of the front legs. The legs are joined below by four plain stretchers. The seat consists of 3 boards (laterally-grained) nailed into rebates in the side rails.

Apparent modifications
Both back legs rebuilt (the bottom 18cm) creating splayed back feet.
Seat boards replaced.
Side and back stretchers replaced.
Large shaped metal bracket screwed behind the crest, supporting breaks.
Mouldings to seat rails added possibly.
It seems likely that some inlay has been replaced.

Oak arm-chair with carved crest and 'ears', turned and fluted front legs, inlaid back and front and side rails.

Arm-chair; the solid back is formed of a large and a small panel, inlaid with floral scrollwork and birds in holly cherry, bog-oak and stained woods; the uprights and cross piece enclosing the panels are also inlaid. The back is surmounted by a voluted cresting carved with acanthus, and at each side is a 'ear-piece' with similar decoration. The arms slope downwards and are supported on prolongations of the front legs, which, with the supports, are turned and fluted. The legs are joined below by four plain stretchers. The framing below the seat is inlaid with a band of lozenges, and the upper parts or each of the front legs with floral sprigs.

AN INLAID ARMCHAIR. Plate 9, page 35. In this sixteenth-century inland armchair the designer ls evidently beginning to study the comfort of the sitter, as it will be seen that the back is inclined at a very considerable angle. Here colour is introduced into the inlay, and the very highly conventionalised ﬂoral forms are relieved by the crudest possible representations of birds. The whole of the stems of the ornament are in black, and the effect, in spite of the crudity of the design, is one of considerable richness. The rails underneath the seat are decorated with a running band of boxwood on which alternate squares of black and red wood, are placed diamond-wise. The legs and supports for the arms are ﬂuted, and to preclude any possibility of the chair tipping backwards when used by a heavy person, the bottoms of the back legs are splayed to prevent the overturning of the chair. The arms still look uncomfortable, as they are very narrow, it was not until later that it was considered necessary to form a broad ledge on which to rest the arms.
Measured drawings of English Furniture, P.E.Marx and M.S.Taylor (London, 1931), plate 12, pp.58-9

Armchair
Oak, carved and inlaid with various woods.
English, about 1600

The formalised floral inlay on the back and the foliage carved on the cresting of this chair are typical features of the period. The elegant fluted legs resemble those on a pair of stools also in this room. [1968] 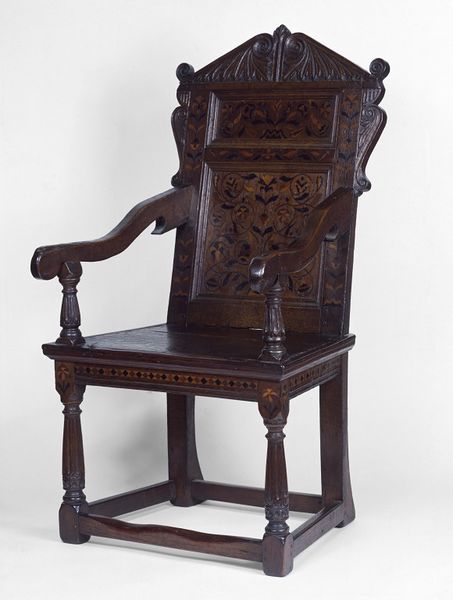