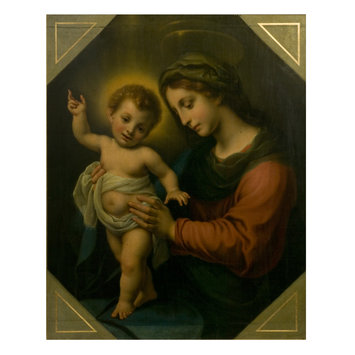 The Virgin Holding the Standing Infant

Carlo Dolci (1616-1687) was born in Florence and entered the studio of Jacopo Vignali (1592-1664) in 1625 and probably also studied Netherlandish painting. He developed an extreme attention to details and specialised in the production of highly refined and intensely religious pictures. In 1648 he became a member of the Accademia del Disegno and received many commissions. Duke Cosimo III de Medici patronized him throughout his career. He had a large studio and taught his daughter, Agnese, who was also a painter. After the arrival of Luca Giordano in Florence in 1682, whose style was entirely opposed to that of Dolci, Dolci's reputation declined and his psychological balance deteriorated while he was already suffering from depression. Dolci's works were highly praised by the English aristocracy as early as the 17th century but during the 19th century English writers such as John Ruskin attacked his reputation that remained low until the 1960s.

This painting is a 19th-century copy of a composition by Carlo Dolci, of which three versions are known. It shows the Infant Christ standing on a parapet in front of the Virgin, a golden glow around his head simulating the traditional halo that the Virgin however bears. This picture is a good example of Carlo Dolci's graceful interpretation of the traditional representation of the Virgin and Child infused with a sense of great spirituality enhanced by the softness of the modelling and the painstaking execution of whole scene that characterised much of his art.

In an octagonal format and set against a neutral dark background the Virgin and the Child are depicted side by side, the Child standing on a parapet in front of her, a golden glow around his head. The Virgin shown in profile is holding the Child by the waist and is looking down.

Historical significance: The present painting is a copy of a famous composition by Carlo Dolci, of which three versions are known: the original version is dated ca. 1630. Painted on a rectangular format whereas the other two are octagonal, the work is housed in the Galleria Borghese, Rome. The other two versions were probably executed in the mid-late 1530s and are respectively preserved in the Kunsthistorisches Museum, Vienna and in the Palazzo Pitti, Florence. Of these, 1358-1869 is most closely related to the Vienna version. Another version, which differs in being circular, ascribed to Agnese Dolci, was in the Tatton sale, Christie's, 14 Dec. 1928, lot 126. A technical and stylistic examination of the present painting indicates that it was probably copied during the 19th century.
The subject matter is gracefully executed in a delicate almost pastel palette recalling the softness of Correggio while Caravaggesque chiaroscuro enhanced by the dark neutral background relates to the art of Dolci's master, Jacopo Vignali.
The Infant Christ is shown standing on a parapet in front of the Virgin, a golden glow around his head instead of a proper halo, while she is looking down in the act of humility. He is attempting to make his first steps and appears already in the gesture of the Redeemer, his right hand pointing up and his gaze facing the beholder. This painting is a good example of Dolci's intense religious devotion which he translated here through the delicate balance between the child's fragility and his potential strength as the son of God. Dolci was famous for his production of intensely charged religious images enable to emotionally carry away the spectator. This picture was probably intended for private devotion conducted in a private chapel, monastic cell, or simply in a secluded part of the home. 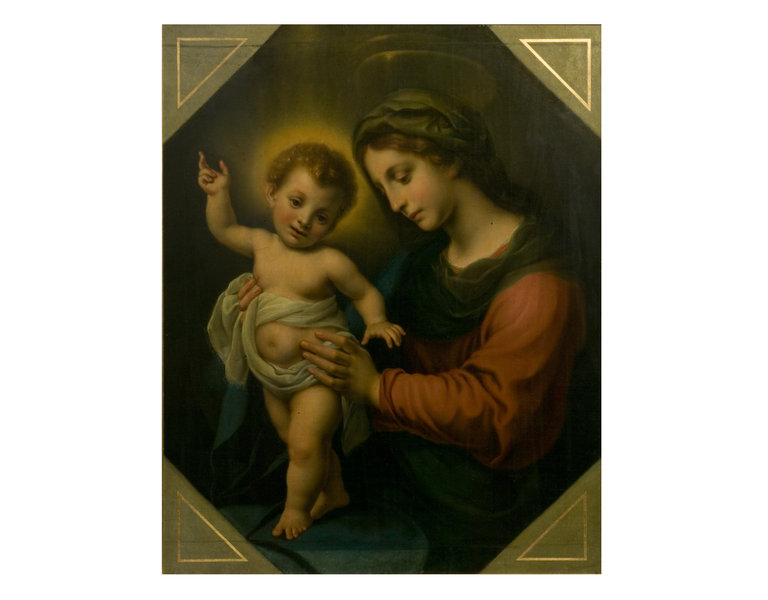