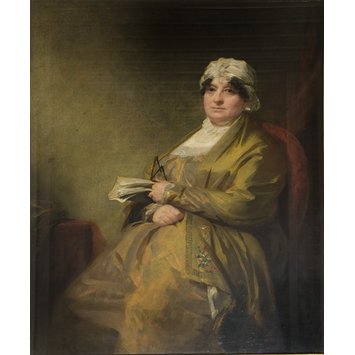 Oil on canvas depicting 'Mrs Hobson of Markfield', the wife of a building contractor. She is portrayed seated, three-quarter length in a dark green dress and bonnet, holding a book in front of her.

Historical Significance: Sir Henry Raeburn was the son of a businessman in the textile trade. Both of his parents died when he was a child and he was subsequently supported by his elder brother William. Raeburn’s first experience in art was through an apprenticeship with James Gilliland, a jeweller. The decoration of jeweller’s materials and the related art of miniature painting were crucial parts of Raeburn’s artistic formation. Despite the characteristic breadth of handling, this early experience is visible in passages of fine detail in his mature work.

Examples of Raeburn’s early portraits include the quarter-length <i>James Hutton</i> (1778; Edinburgh, National Galleries of Scotland) and the famous <i>Rev. Robert Walker Skating on Duddingston Loch</i> (1784 (?); Edinburgh, National Galleries of Scotland). The latter work shows a confidence of design and a precise control of light and shadow. Its style and quality foreshadow the maturity of the 1790s, and for that reason the early date has been disputed.

In 1784 Raeburn travelled to Rome via London, where he possibly met Joshua Reynolds (1723-1792). There is little evidence as to how Raeburn used his time in Italy, although works such as <i>Admiral Inglis</i> (1780s; Edinburgh, NGS) show chromatic values which may be related to Pompeo Batoni (1708-1787), the most popular portrait painter among English tourists in Rome.

Sir Henry Raeburn came back to Edinburgh around 1786, and later established a successful practice as a portrait painter. He practically eliminated all competition on the market, and therefore his paintings serve as a magnificent insight into the society of the time. Raeburn developed a personal style based on direct observation, bold handling of the brush and lack of a preparatory layer of drawing. However, his background in miniature painting remained influential in his handling of costumes and areas of still-life.

At the beginning of the nineteenth century Raeburn’s introduced cooler colour schemes and a neo-classical elegance of line. His work at the time shows a remarkable range, from the dazzling colours in the majestic <i>Colonel Alastair Ranaldson Macdonell of Glengarry</i> (ex. 1812; Edinburgh, NGS) to the intimate, yet carefully executed portrait of the engineer <i>John Rennie</i> (c. 1810; Edinburgh, NGS).

In 1815 Raeburn was elected a member of Royal Academy in London. His inaugural piece, a <i>Self-portrait</i> (Edinburgh, NGS) shows his ambition to impress a London audience. However, Raeburn never managed to conquer the artistic scene of the capital and the rest of his career evolved around Edinburgh. He was knighted in 1822 by George IV, which marked the height of his achievement.

This portrait is of Mrs William Hobson of Markfield, nee Ann Rickman. Ann Rickman married William Hobson in 1779. They had sixteen children, thirteen girls and three boys. Although couple had Quaker origins many aspects of their lifestyle were not approved by the Friends. For example William Hobson kept a box at the Opera and Ann was criticised for allowing their children to study musical instruments.

It is likely that Raeburn painted both Mr and Mrs Hobson of Markfield late in his career. This is confirmed by the dress of the sitters which dates to the 1820s. This portrait shows Mrs Hobson seated and looking out. She is holding a book and spectacles. Her pose is symmetrical to her husband’s. The two chairs of the portraits also seem to match. This is continued in what the sitters are shown doing, with William Hobson sat at a desk with plans, referring to his role in construction, whilst Ann is seated with book and spectacles whilst reading.

As in other portraits, Raeburn differentiates his brushstrokes depending on the depicted object and the effect he wants to achieve. Some areas of the painting, such as the face and the hair, are handled with a very delicate touch whereas the dress is depicted with playful sketchiness.

The V&A owns the portrait of Mr. Hobson (V&A inventory number P.7-1921). Both were probably painted at the same time and were given to the museum in a single bequest. 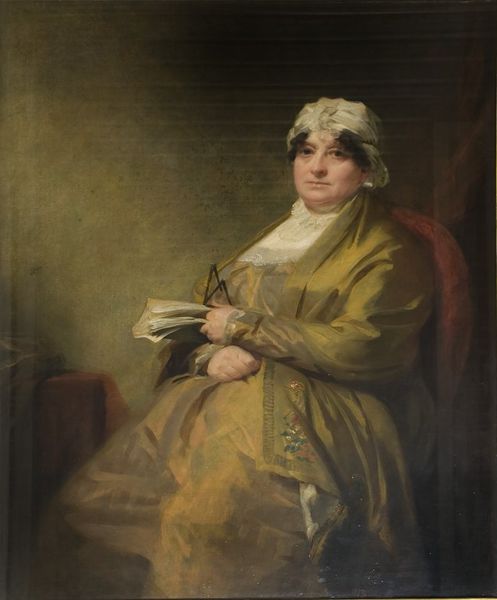