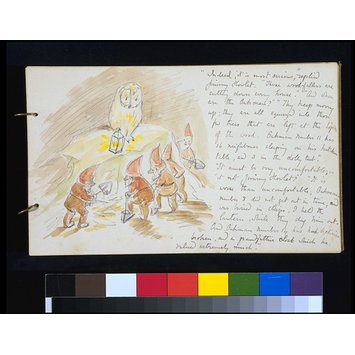 Beatrix Potter (1866-1943) is one of the world's best-loved children's authors and illustrators. She wrote the majority of the twenty-three Original Peter Rabbit Books between 1901 and 1913. The Tale of Peter Rabbit (Frederick Warne, 1902) is her most famous and best-loved tale.

Beatrix Potter married William Heelis in 1913. William's sister, Grace Nicholson, had five children; Nancy was about nine years old when Beatrix first met her and they became friends. Nancy recalled her first meeting with Beatrix: 'To amuse myself I used to play with stones, shells, worms, and of course imaginary people. The oak-men were imaginary people who lived in trees, and I remember my amazement on my first visit to Sawrey, when this new aunt left the grown-ups and came to me to imagine windows and doors in the trees with people peeping out'.

In 1916 Beatrix Potter considered publishing a story about Nancy's make-believe oakmen. Potter had always illustrated her own stories but by 1916 her eyesight was beginning to fail and her hands were growing stiff. She urged her publisher to find ‘some second string’ to execute the illustrations to her stories. Keen to retain the credit for the design of the illustrations herself, Potter collaborated with a commercial artist, Ernest Aris (1882-1963), who she hoped would 'draw to order’. Ernest Aris had studied at the Bradford School of Art and, later, at the Royal College of Art in London. He began his career as a portrait artist and art teacher, working in watercolour and charcoal and wash, and exhibited his work at the Royal Academy, Royal Society of British Artists and the Royal Institute of Painters in Watercolours. By 1909, Ernest was illustrating for magazines such as The Graphic and writing and illustrating children’s books. By the end of his career he had written and illustrated over 170 books (the majority published by Humphrey Milford and Hodder and Stoughton) and contributed illustrations to a further 250 titles.

Potter concealed from Aris both the text of her story and her own identity; she sent him pencil sketches of her designs for the illustrations, annotated with instructions for their completion. Aris returned his completed illustrations to Potter, commenting that her designs were ‘charming little ideas’ and her composition was, ‘in most cases’, good. However, he instructed Potter that her proposed colour scheme was ‘a little on the sombre side’ and that clean, bright colours are ‘essential for children’. It is very likely that Aris knew the origin of his commission; in any case, his remarks must have irritated Potter who would not have welcomed criticism from a commercial illustrator.

Potter produced a beautifully illustrated manuscript of the story of the oakmen and presented it to Nancy as a Christmas present in 1916, and as a reminder of their first meeting. However, due to some doubts as to its originality, the story of the oakmen was never published. Instead, Potter published The Tale of Johnny Town-mouse. In any case, the collaboration between Potter and Aris broke down when Potter's publisher, Frederick Warne & Co., accused Aris's publishers of plagiarism: Aris's latest book, The Treasure Seekers (1916), featured a rabbit called Peter. Aris claimed in his defence that he had never heard of The Tale of Peter Rabbit (1902) and impertinently requested a signed copy from Potter. Potter replied, 'I regret that I am unable to believe that your statements are truthful. Coincidence has a long arm but there are limits to coincidences'. She retorted, 'Your work has considerably technical facility but no originality'.

Ernest Aris went on to have a very successful career as a commercial artist. He used oakmen-like figures in his subsequent children's books, in particular Wee Benjy Brown, Wee Squirrelkin and The Three Bad Ducklings. His illustrations were also used for advertisements, cigarette cards, games, jigsaw puzzles and seaside postcards. In 1934 Cadbury’s commissioned Aris to design the Cococubs, a collection of animal characters to be given away free with their children’s cocoa. It was hailed as one of the greatest advertising schemes of the time, with an estimated 300,000 children collecting them.

Nancy Nicholson presented the illustrated manuscript to the Museum in 1997, together with other letters to both her and her mother, Grace Nicholson. The letters, in particular, shed light on Beatrix's latter years as a married woman from 1913 to 1943.

Castle Cottage (House in Sawrey) (made)

Illustrated letter by Beatrix Potter to Nancy Nicholson, dated Christmas 1916, featuring the story of the oakmen.

Archive of Art and Design 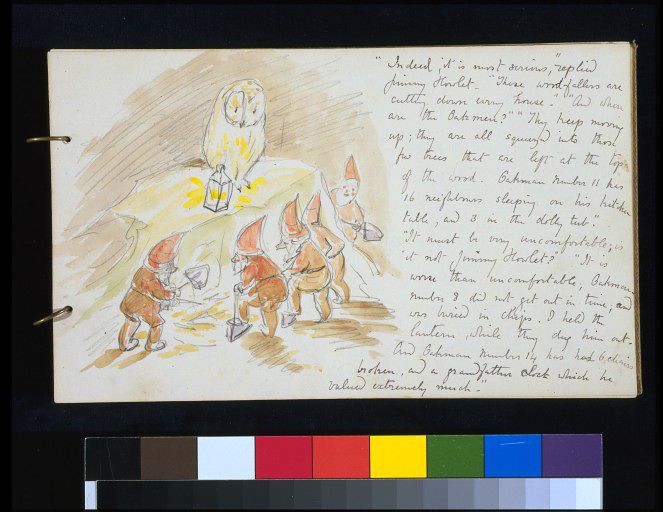