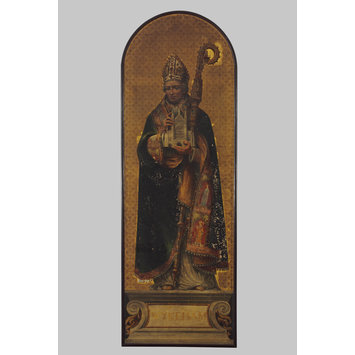 Historical significance: William of Wykeham (1324-1404) was twice Chancellor of England, Bishop of Winchester, and founder of Winchester College and New College Oxford. One of the greatest figures in the arts of his day, he was patron of the rebuilding of the nave of Winchester Cathedral. Work to transform the Norman nave at Winchester was undertaken by the Master Mason William Wynford, but Burchett presents Wykeham as the 'architect' in the wider sense of the word. Wykeham is one of three architects in this series of great artists: the others are Inigo Jones and Sir Christopher Wren.

Wykeham is represented by Burchett in the traditional manner of a bishop-saint, holding his crosier and a model of his cathedral. The likeness of Wykeham is probably taken from a mezzotint of around 1710-20 by John Faber Sr, which ultimately derives from his tomb effigy in Winchester Cathedral.

Richard Burchett (1815-1875) studied art at Birkbeck Mechanics Institute in Chancery Lane, London. In about 1841, he joined the Government School of Design at Somerset House, becoming an Assistant Master in 1845. In 1851, after the School's move to South Kensington, he was appointed Headmaster of the Department of Practical Art. He exhibited five works at the RA between 1847 and 1873. He worked on the decorations of the Palace of Westminster 1855-9, the dome of the 1862 Great Exhibition building, and painted a window for the Greenwich Hospital. Burchett was primarily a teacher and administrator; his portrait appears alongside Henry Cole's in Val Prinsep's painting The Distribution of Art Prizes.

Burchett was given two medieval English subjects, William of Wykeham and William Torel.

Oil painting, 'William of Wykeham' (design for the Kensington Valhalla), Richard Burchett, about 1866-7 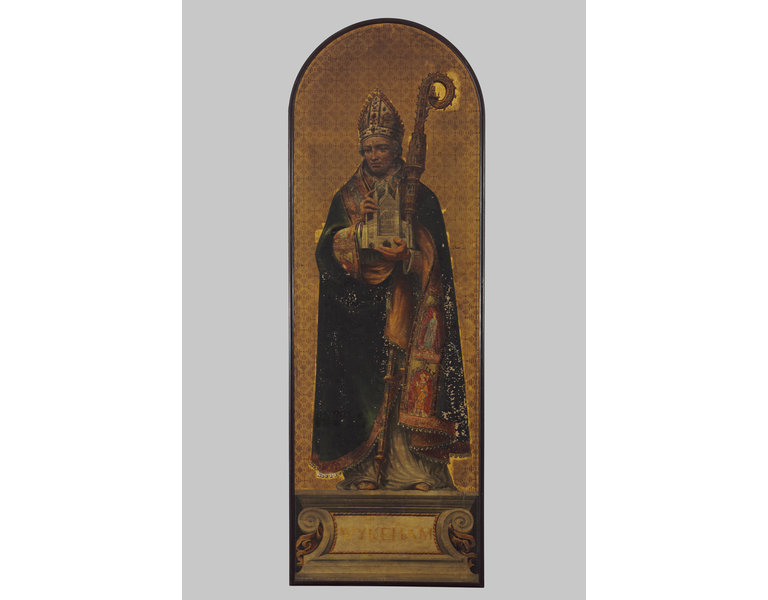