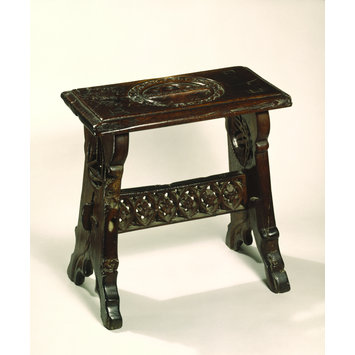 Construction of plain sawn oak showing a plane nick on most surfaces
The seat with raised field, and chamfered around the edges, and with a circular, cusped opening crossed by a bar, which is carved with leaf ornament. The opening is surrounded by a wreath. The two legs have been tenoned into the seat, each using two, angled rectangular tenons (3 of them wedged). Note that the tenons are irregular (more difficult to cut this way, and would be strained when the stool is lifted by the seat, although they are angled and have been wedged, but note that one wedge has been inserted along the long side.

One leg has a pierced rosette with 6-pointed star tracery, the other with trefoil tracery, while the cusped, ogee arch on each leg has been carved on its inner as well as outer face. The legs now have rounded edges but were probably finished with a flat chamfer that has worn. The rail joining the legs is pierced with tracery and rosettes, and is tusk tenoned.

On the underside of the seat carved III V [the V shape carved out not just lines].
The tusks replaced. One leg has a spliced-in repair

The use of very knotty oak seems surprising for a highly carved object of apparent ambition. While the feet may all have been cut down equally, the stool feet do not obviously appear to have been reduced, and it is worth considering that the height of the stool may be lower than others of this date, often perched upon (ie higher than a modern seat). All the decoration speaks of a unified piece, there is no evidence of old timber being reused, but the sophistication of the arches (chamfered on either side) and roses on the legs seems somewhat at odds with the rather lumpen finishing of the leg immediately under the seat. The numbering on the underside appears to suggest that it was one of a set of similar stools.

The authenticity of this stool is not certain. At about 500 years old, this is a barely plausible survival, given the sort of use to which such an object was normally put. However, if this is a 19c fake, then it seems a very good one. It is unlikely that a sufficient number of growth rings could be read in order to obtain a reliable dendrochronological dating.

See Corrozet on the buffet stool.
Tusk tenoning was well established before the 15th century. The use of tusk tenons on a highly decorated stool may seem unusual when a stool would not have needed to be knocked down, and where tusk tenons are often reserved for invisible surfaces eg the back of cupboards or built-in choirstalls.

Stools and benches were the common form of seat-furniture in mediaeval living-rooms, while chairs, regarded as symbols of authority, were reserved for the master of the household and for guests of honour. [Pre-2006] 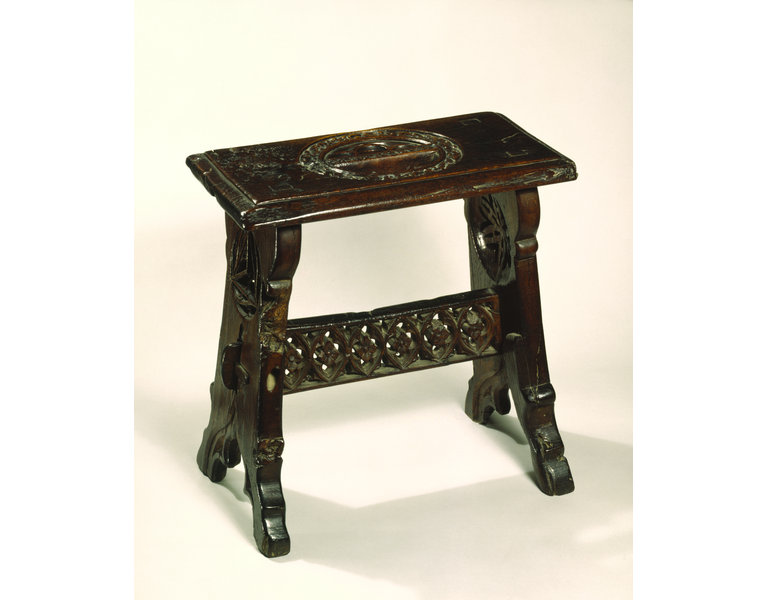