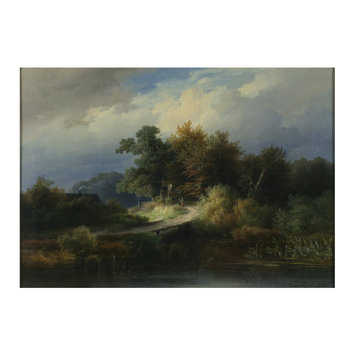 August Rosenthal (1820) was born in Hanover but settled in Munich. Very little is known about his training although his paintings demonstrate the influence of the German Romanticism. He died sometimes in the second half of the 19th century probably in Munich.

This painting is a fine example of late Romantic landscapes produced in Munich around 1850. Much of these works involved plein-air painting of landscapes characterised by a high degree of finish in a dark, subdued palette with dramatic effects of colour and light. This type of painting was quite popular with collectors in the second half of the century.

Large landscape with a river in the foreground surmounted by a winding path on which small figures are walking away; a house on the left hand-side, a wood in the background under a stormy sky.

'A Rosenthal 1848'
Signed and dated by the artist, lower right; 'A R' in monogram

Historical significance: This painting is typical of the works produced in Germany around 1850. Munich was one of the main artistic centres in Germany, along with Düsseldorf. Germanic art was then dominated by the Romantic movement, notable especially for his symbolic and atmospheric treatment of landscape and focus on the sublime, epitomised in the art of Caspar David Friedrich (1774-1840) and Johann Christian Dahl (1788-1857). The present composition was probably inspired by the German countryside but also presents an idealised nature enlivened by the small figures walking on a path, this addition, emulated by the 17th-century Dutch art is typical of the late Romanticism imagery.
A similar composition dated 1851 was sold at Hampel Kunstauktionem, Munich, 4 April 2008, lot 533.
This painting was given by the Rev. Townshend who owns a comprehensive collection of landscape paintings by 19th-century Northern artists. 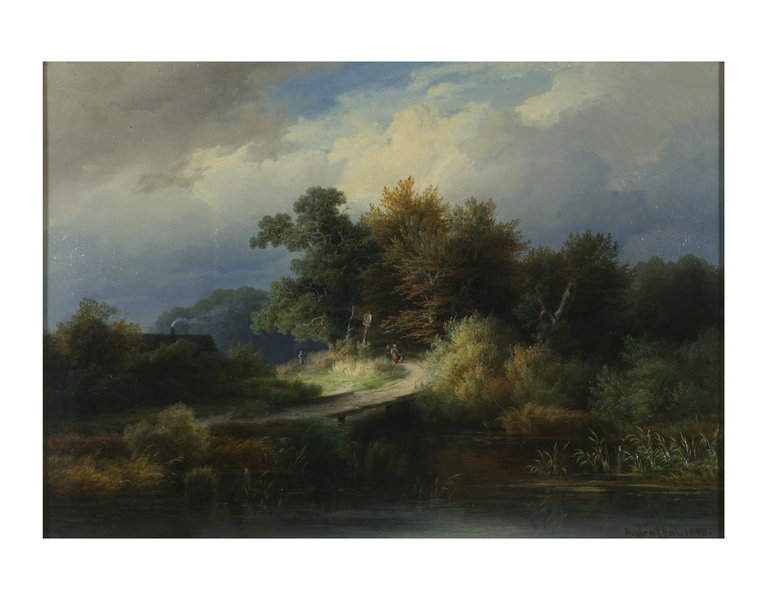