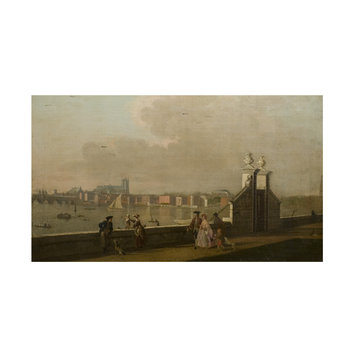 View from the Terrace of Old Somerset House

This view of the river Thames is one of several which Sandby executed from the vantage point of Old Somerset House Gardens. Showing the dynamic bend in the river upstream to the west, it was a view popular with both artists and tourists alike and was made especially famous by Canaletto’s panoramic versions now in the Royal Collection. The painting also shows Sandby’s keen eye for incidental human behaviour in groups of figures, which he often used, as here, to enliven the foreground of his works.

A view of the river Thames showing the bend in the river upstream to the west with Westminster Abbey dominating the skyline; the four towers of St John’s Smith Square and Westminster Bridge on the left, the Banqueting Hall, right of centre, and the York Buildings Water Tower on the extreme right. The terrace of Old Somerset House Gardens and its Water Gate is depicted in the foreground along with two small family groups and two solitary figures leaning over the parapet.

William Arnold Sandby, was Thomas Sandby’s great-grandson and Paul Sandby’s great-grand-nephew. His large collection of works by the Sandby brothers ‘was largely the result of his own efforts to put together a memorial to his ancestors, and only a small part of it seems to have descended in the family. William Sandby produced a more lasting memorial in the form of the monograph on the brothers that he eventually published in 1892, a book that remains the basis of much of our knowledge of the brothers’ lives’ (John Bonehill and Stephen Daniels (eds.), Paul Sandby: Picturing Britain, London, 2009, p.27).

This is one of several images of the view from the terrace of Old Somerset House executed by Paul Sandby. It shows the walkway of Old Somerset House gardens in the foreground and the dynamic bend in the river Thames upstream to the west. With Westminster Abbey dominating the skyline, the painting depicts the sweep from the newly-built Westminster Bridge and the four towers of St John’s Smith Square on the left, through to the Banqueting Hall and the 17th- century York Buildings Water Tower on the extreme right. In doing so, the artist contrasts the ancient with the modern and the formal elegance of the walkway with the developing urban sprawl along the riverbank (John Bonehill and Stephen Daniels (eds), Paul Sandby: Picturing Britain, London, 2009, pp. 148-151).

The V&A painting and the above-cited works are part of a well-established pictorial tradition of depicting expansive views of the Thames from the vantage point of Old and New Somerset House. The Italian artist Giovanni Antonio Canal (1697 – 1768), known as Canaletto, has long been credited with their invention. A. P. Oppé for example cites the pendant panoramic views attributed to Paul Sandby in the British Museum as ‘the obvious imitation’ of Canaletto, as do Bonehill and Daniels, albeit filtered through the 1751 engravings after Canaletto by Edward Rooker and Johann Sebastian Mueller (A.P. Oppé, The Drawings of Paul and Thomas Sandby in the Collection of His Majesty the King at Windsor Castle, Oxford and London, 1947, p.12; Bonehill and Daniels, pp.148-151).

Bruce Robertson questions Canaletto’s influence and points to a common source for both Canaletto and the Sandbys alike, in John Maurer’s engravings begun in 1742; see for example Maurer’s print A Perspective View of ye Royal Garden of Somerset next ye River, Mus.No. 1880,1113.1425, British Museum (Bruce Robertson, The Art of Paul Sandby, 1985, p.18).

It is not impossible that Sandby had recourse to both Canaletto and Maurer as inspiration. Canaletto’s use of figures to enliven the foreground, especially those perching over the parapet as seen in The Thames from Somerset House towards Westminster (RICN 400506, Royal Collection), are strongly echoed in Sandby’s work. Sandby’s perspective views of the Thames were bound to recall Canaletto’s magisterial paintings and the implied parallel between London’s maritime and mercantile greatness with that of Venice, enshrined in Canaletto’s Thames paintings, would not have been lost on Sandby’s contemporaries (Bonehill and Daniels, p. 123).

The foreground figures in the V&A painting are typical of Paul Sandby’s work and his keen eye for incidental human behaviour. The male figure leaning nonchalantly on the parapet towards the left recalls the study of a man in the Royal Collection (RCIN 14468). Sandby contrasts this with the literally ‘edgy’ moment of the toddler teetering on the parapet which is a recurring motif in the Windsor pictures executed by both Sandby brothers; see for example RCIN 14527, and the V&A’s Windsor Castle: the North Terrace looking west, at sunset (P.7-1945). It is also worth noting the correlation between the relaxed, strolling family group with a similar grouping in the left foreground of the Royal Collection’s Old Somerset House, attributed to Thomas Sandby (RCIN 914698).

Oil painting, 'View from the Terrace of Old Somerset House', Paul Sandby, before 1775 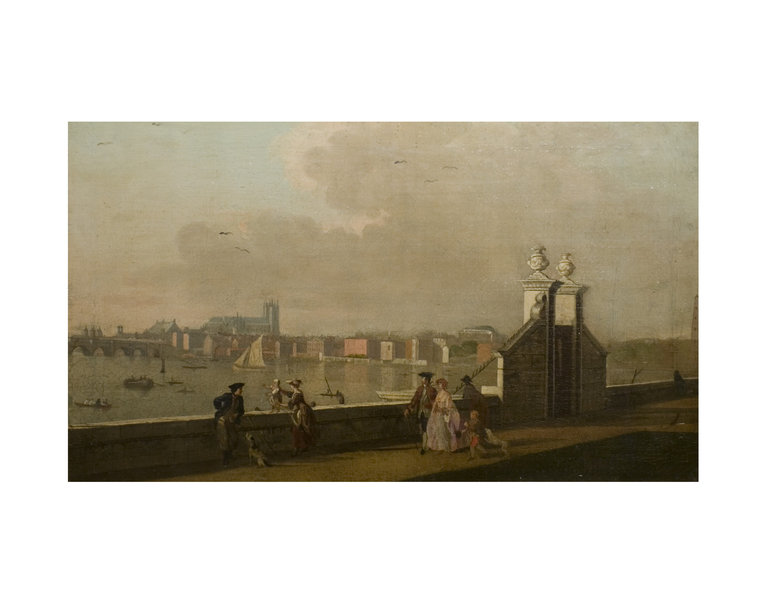