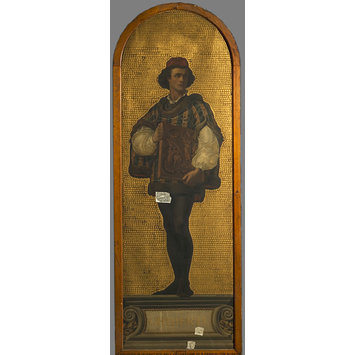 Ghiberti: design for a mosaic in the Museum (the 'Kensington Valhalla')

Full-length portrait of Ghiberti holding a section of his bronze doors.

Historical significance: This is a portrait of Lorenzo Ghiberti (1378/81-1455), a major Florentine goldsmith and sculptor of the early Renaissance. He is famous for two sets of bronze doors for the Baptistery in Florence, commissions which shaped his career, occupying him for a total of 49 years.

In 1401 Ghiberti won the competition for the first of these, the North doors, defeating Brunelleschi. Fisk depicts Ghiberti holding the gilt bronze panel which won him this first great commission, a relief depicting the Sacrifice of Isaac (Bargello, Florence). The museum had purchased an electrotype cast of this relief in 1871 (museum number 1871-30).

William Henry Fisk (1827-1884) was a landscape and historical genre painter and drawing teacher. He exhibited at the Society of British Artists, the Royal Academy and the British Institution between 1846 and 1873.

In 1849 Fisk was one of the first of a number of watercolourists invited to Balmoral to paint views for Queen Victoria. The Queen chose four of Fisk's views of the local topography for inclusion in one of her 'souvenir albums' which she and Prince Albert had compiled since their marriage.

For 40 years Fisk taught drawing and painting at University College School in Gower Street, which had been founded in 1830 as part of University College London. He was also an anatomical draughtsman at the Royal College of Surgeons.