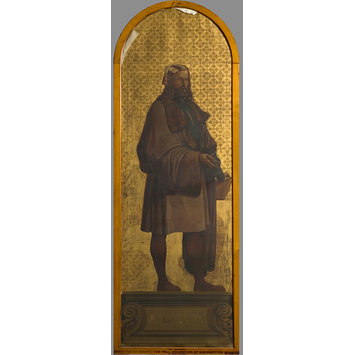 Albert Dürer: design for a mosaic in the Museum (the 'Kensington Valhalla')

Historical significance: Albrecht Dürer (1471-1528) has come to be seen as the archtypal Renaissance artist of Northern Europe, celebrated for his remarkable powers of observation and his ability to render exact and meticulous detail in his studies from the life. A man of great intellectual curiosity, he was deeply interested in the science of proportion and perspective. He visited Italy, where he was influenced by Mantegna, Leonardo and Giovanni Bellini. His prints in turn influenced Italian artists.

The portrait derives from prints after Dürer's famous self-portrait at the age of 26, in which he wears a striped cap with tassels (Museo del Prado, Madrid).

William Henry Fisk also produced a portrait of Dürer for the Valhalla series; however, for some reason neither Cave's nor Fisk's was converted into mosaic.

William Cave Thomas (b.1820, fl.1838-1884) was a painter of genre, historical, literary and biblical subjects. He studied at the Royal Academy Schools in 1838. In 1840 he travelled to Munich to see the work of the Nazarene painters, and entered the Munich Academy. He won premiums for cartoons submitted to the Westminster Hall competitions.

Oil painting, 'Albert Dürer', design for a mosaic in the Kensington Valhalla (not executed), W. Cave Thomas, about 1868

Paintings; Portraits; History of the V&A