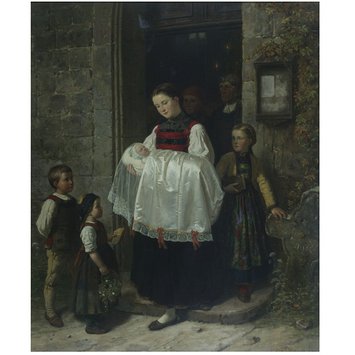 The Return from the Christening

This painting is a fine example of Salentin's genre scenes of the rustic life in West Germany. It depicts a young mother in traditional costume with her new born child in her arms leaving the church after the baptism. This painting is characteristic of the Düsseldorf school, one of the main artistic centres in 19th-century Germany, which favoured an extreme naturalness of representation and carefully staged compositions. The subject matter derived here from the Biedermeier painters who praised sentimental and anecdotal genre scenes.

A young mother in traditional costume with her new born child in her arms on the threshold of a church, three children surround her while two persons are behind her.

Historical significance: This composition may have proved particularly popular as Salentin produced 3 versions of it throughout the 1860s and an additional two set in a domestic interior:
- a very similar composition with a slight difference in the number of figures and in the mother's feature is dated 1860,
- another is dated 1869,
The other two versions set indoors are:
- one dated 1864 set in a domestic interior
- and another, a replica of the latter set in a church.
Apart from the V&A painting, all these works are currently in private collections. 515-1870 appears therefore the earliest version and prototype of the whole series.
This type of paintings were quite popular in the second half of the 19th century and constituted an interesting document of the German rustic life. 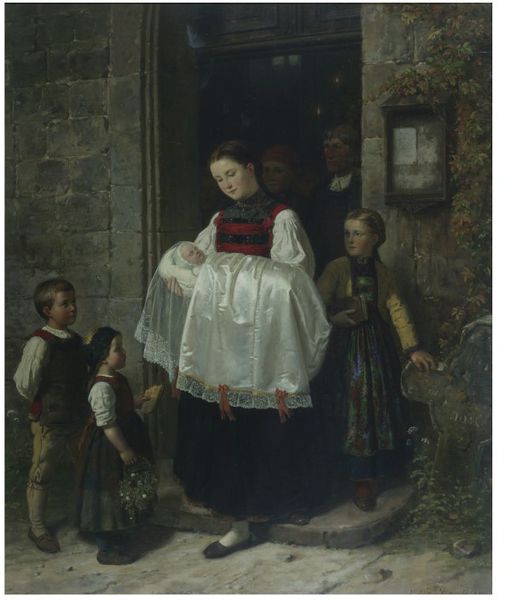