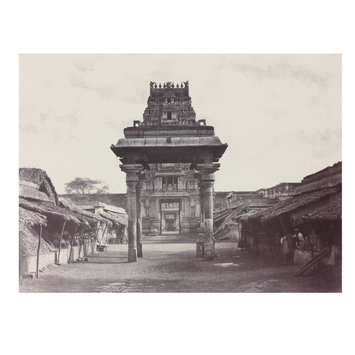 'A small four pillared Mundapum inside the Second Gopuram

This photograph is part of the album he produced of Seringham or Srirangam. The first five plates in the album show the ‘Great Pagoda’, or Sri Ranganathaswamy Temple. It was mostly built from the 14th to the 17th centuries and is one of the largest temple complexes in India, with seven concentric walls and 21 gopuras, or gateways. The main temple is dedicated to the Hindu god Vishnu. This photographs shows a four-pillared munduppum or pavilion within the second gopuram.

This black and white photograph shows a long road or enclosure with a 4-pillared hall in the centre, and a large Hindu temple gateway beyond that. On either side are rows of single-story straw-covered stands or shelters.

This photograph was given by Lady Denison in 1889 during the keepership of Caspar Purdon Clarke, Keeper of the Indian Section of the V&A. It was written off in 1937, and rediscovered and re-evaluated in the 1990s. See Dewan p.383 for listings of other copies elsewhere.
This photograph was published as plate III of nine in the album Photographic Views of Seringham 1858, by 'Captain L. Tripe, Government Photographer', published in 1860. It was taken as part of Tripe's remit as the government photographer, which he himself defined broadly, as recording, ‘before they disappear’ buildings, sculptures and inscriptions…' including the picturesque. This was a model for an extensive survey, including tuition of others and experimentation in his own practice. He was funded by the Madras government, but intended selling additional copies of some prints so that his practice could be self-funding. Unusually, the prints in this album were published without any accompanying text.

Photograph, No. III 'A small four pillared Mundapum inside the Second Gopuram', from the photograph album by Capt. Linnaeus Tripe, 'Photographic Views of Seringham'; South India, 1858

Edition number unknown. The album of which this photograph is part was one of between 37 and 39 copies to have been produced. 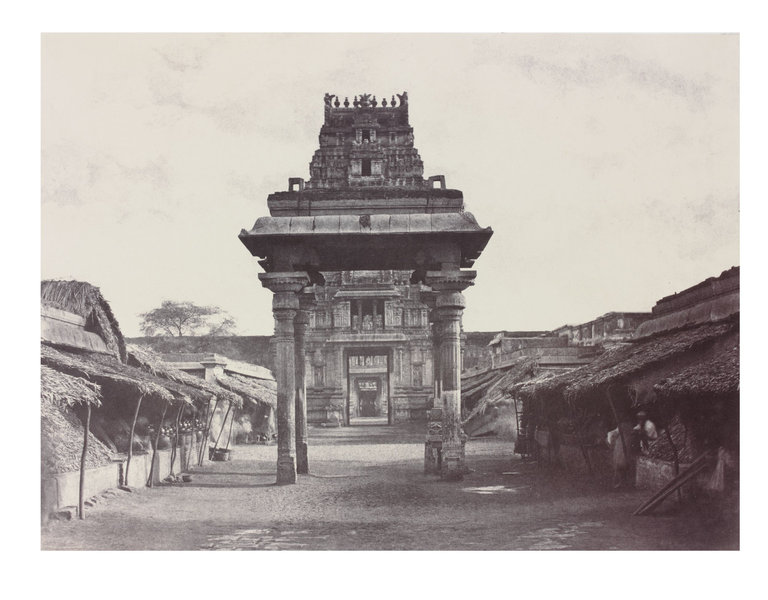