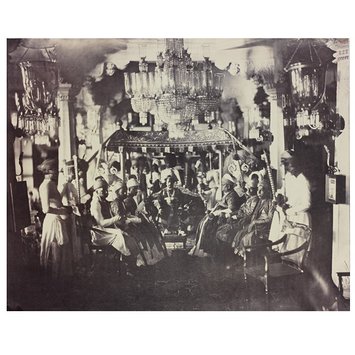 This photograph is part of the album he produced of Poodoocottah, or Pudukkottai. Known as an early settlement, the town is dotted with natural rock shelters, stone circles and Neolithic burial sites. This photograph is unusual for Tripe because it shows an interior, and features people. The main subject in the centre distance, sitting under the canopy, is His Excellency the seventh Tondiman Rajah, Ramachandra Tondiman (1829–1886).

This black and white photograph shows an opulent room with a central chandelier. Underneath a canopy in the centre distance sits the Rajah, and on either side leading up to him are rows of men wearing turbans, facing each other. Their faces are slightly blurred because of the long exposure.

This photograph was given by Lady Denison in 1889 during the keepership of Caspar Purdon Clarke, Keeper of the Indian Section of the V&A. It was written off in 1937, and rediscovered and re-evaluated in the 1990s. See Dewan p.465 for listings of other copies elsewhere.
This photograph was published as plate I of ten in the album Photographic Views of Poodoocottah 1858, by 'Captain L. Tripe, Government Photographer', published in 1860. It was taken as part of Tripe's remit as the government photographer, which he himself defined broadly, as recording, ‘before they disappear’ buildings, sculptures and inscriptions…' including the picturesque. This was a model for an extensive survey, including tuition of others and experimentation in his own practice. He was funded by the Madras government, but intended selling additional copies of some prints so that his practice could be self-funding. Unusually, the prints in this album were published without any accompanying text.

Photograph, No. I 'H. E. The Tondiman Rajah in Durbar', from the photograph album by Capt. Linnaeus Tripe, 'Photographic Views of Poodoocottah'; South India, 1858

Edition number unknown. The album of which this photograph is part was one of 39 copies to have been produced. 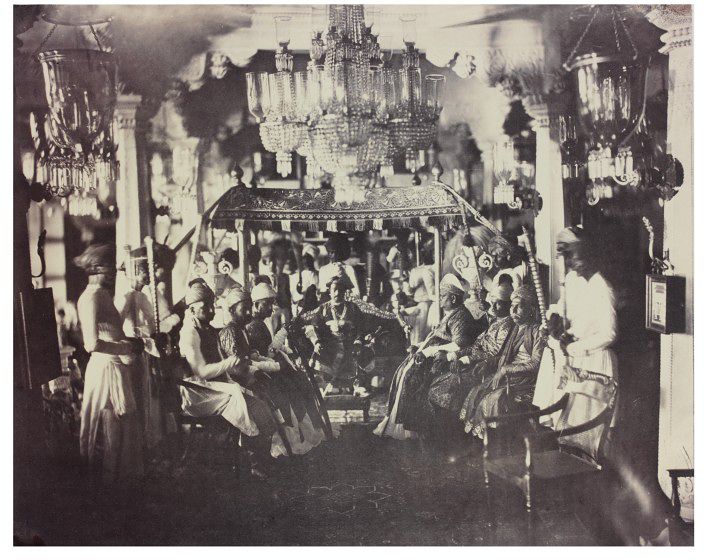