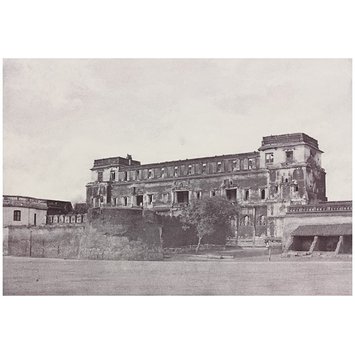 Part of the Palace in the Fort

This photograph is part of the album he produced of Trichinopoly, or Tiruchirappalli.
It shows part of the seventeenth-century palace ascribed to Chokkanatha Nyakkam (ruled 1662-82). The building is also known as ‘Nawab’s palace’, since it was occupied by the British ally the Nawab of Arcot, Muhammad Ali (1717 – 1795), an important figure in the eighteenth-century wars between the British and French over rule of south west India.

This black and white photograph shows a long oblong western-style building with trees in front and an expanse of sky behind.

This photograph was given by Lady Denison in 1889 during the keepership of Caspar Purdon Clarke, Keeper of the Indian Section of the V&A. It was written off in 1937, and rediscovered and re-evaluated in the 1990s. See Dewan p.398 for listings of other copies elsewhere.
This photograph was published as plate VI of nine in the album Photographic Views in Trichinopoly 1858, by 'Captain L. Tripe, Government Photographer', published in 1860. It was taken as part of Tripe's remit as the government photographer, which he himself defined broadly, as recording, ‘before they disappear’ buildings, sculptures and inscriptions…' including the picturesque. This was a model for an extensive survey, including tuition of others and experimentation in his own practice. He was funded by the Madras government, but intended selling additional copies of some prints so that his practice could be self-funding. Unusually, the prints in this album were published without any accompanying text.

Photograph, No. VI 'Part of the Palace in the Fort', from the photograph album by Capt. Linnaeus Tripe, 'Photographic Views in Trichinopoly'; South India, 1858 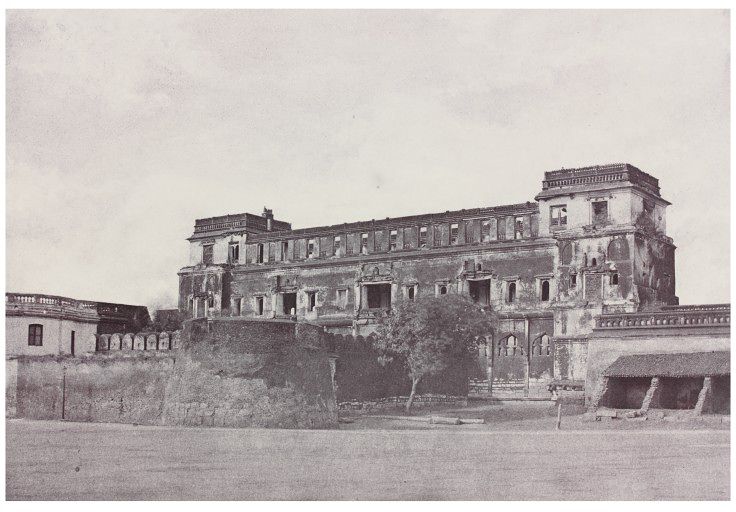