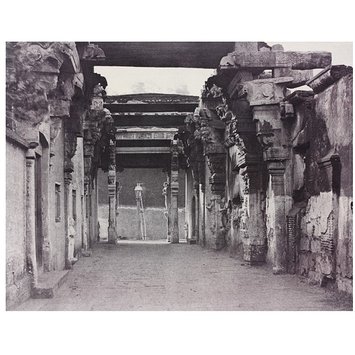 Entrance to the Steps, Leading up to the Pagoda on the Rock, Looking Towards the Street

This photograph is part of the album he produced of Trichinopoly, or Tiruchirappalli. It shows the most famous landmark of the city, a temple about 80 metres high built into the granite structure. This is the entrance to the pagoda, flanked by impressive columns. Tripe has retouched the negative to make the sky white.

This black and white photograph shows the passageway of a temple, with pillars on either side. There are figures built into both sides, and a lamp-post and ladder at the end.

This photograph was given by Lady Denison in 1889 during the keepership of Caspar Purdon Clarke, Keeper of the Indian Section of the V&A. It was written off in 1937, and rediscovered and re-evaluated in the 1990s. See Dewan p.397 for listings of other copies elsewhere.
This photograph was published as plate VII of nine in the album Photographic Views in Trichinopoly 1858, by 'Captain L. Tripe, Government Photographer', published in 1860. It was taken as part of Tripe's remit as the government photographer, which he himself defined broadly, as recording, ‘before they disappear’ buildings, sculptures and inscriptions…' including the picturesque. This was a model for an extensive survey, including tuition of others and experimentation in his own practice. He was funded by the Madras government, but intended selling additional copies of some prints so that his practice could be self-funding. Unusually, the prints in this album were published without any accompanying text.

Photograph, No. V 'Entrance to the Steps, Leading up to the Pagoda on the Rock, Looking Towards the Street', from the photograph album by Capt. Linnaeus Tripe, 'Photographic Views in Trichinopoly'; South India, 1858 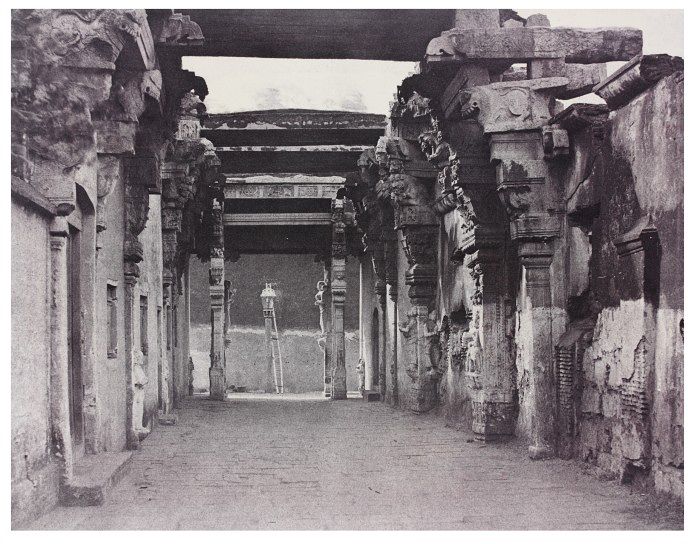