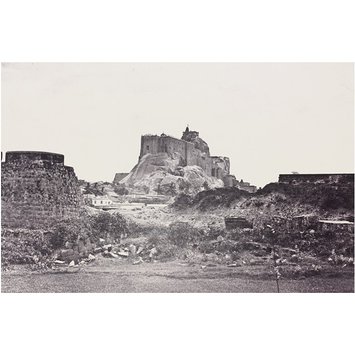 The Rock through a Gap in the Fort Wall on the W. Side

Linnaeus Tripe (1822–1902) documented much of south India as official photographer to the Madras government (1856–1860). Tripe set off on a tour from Bangalore on 14 December 1857. He travelled through the Salem district to Srirangam, Tiruchchirappalli, Madurai, then Pudukkottai, Thanjavur, and Tiruchchirappalli again and ended his tour in Madras on 30 April 1858. This photograph is part of the album he produced of Trichinopoly, or Tiruchirappalli. It shows the most famous landmark of the city, a temple about 80 metres high built into the granite structure.

This black and white photograph shows a castle-like structure built into a rock, with a circular stone building to the left, and rubble in the middle ground. There is grass in the foreground.

This photograph was given by Lady Denison in 1889 during the keepership of Caspar Purdon Clarke, Keeper of the Indian Section of the V&A. It was written off in 1937, and rediscovered and re-evaluated in the 1990s. See Dewan p.393 for listings of other copies elsewhere.
This photograph was published as plate III of nine in the album Photographic Views in Trichinopoly 1858, by 'Captain L. Tripe, Government Photographer', published in 1860. It was taken as part of Tripe's remit as the government photographer, which he himself defined broadly, as recording, ‘before they disappear’ buildings, sculptures and inscriptions…' including the picturesque. This was a model for an extensive survey, including tuition of others and experimentation in his own practice. He was funded by the Madras government, but intended selling additional copies of some prints so that his practice could be self-funding. Unusually, the prints in this album were published without any accompanying text.

The southern districts tour and Madras presidency photographs, 1857–58
The Madras government appointed Tripe as photographer following the 1855 directive from the Court of Directors in London, who discouraged illustration in favour of ‘photography as a means by which representations may be obtained of scenes and buildings, with the advantages of perfect accuracy, small expenditure of time, and moderate cash’, and asked that photography be the main means of recording architecture and antiquities (Dewan, p.6).

Photograph, No. III 'The Rock through a Gap in the Fort Wall on the W. Side', from the photograph album by Capt. Linnaeus Tripe, 'Photographic Views in Trichinopoly'; South India, 1858 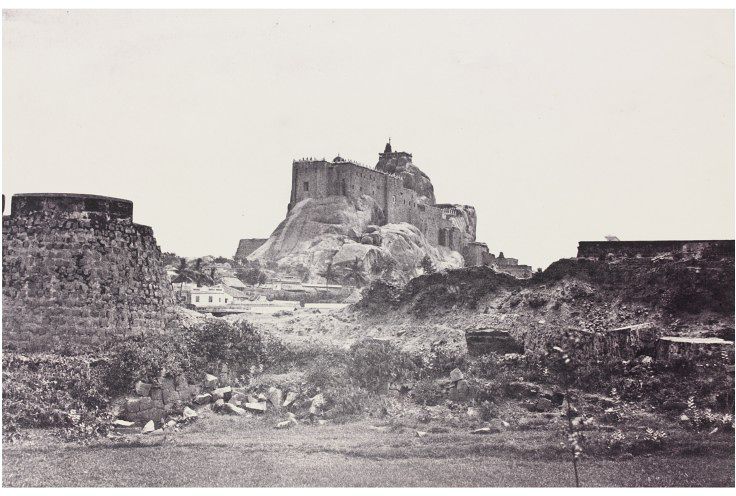