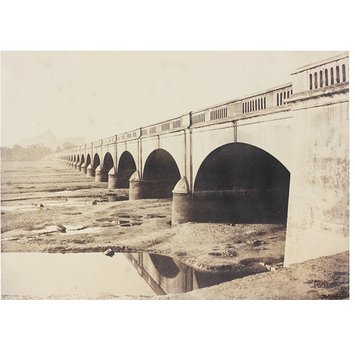 The Bridge from the North Bank of the Kaveri

Linnaeus Tripe (1822–1902) documented much of south India as official photographer to the Madras government (1856–1860). Tripe set off on a tour from Bangalore on 14 December 1857. He travelled through the Salem district to Srirangam, Tiruchchirappalli, Madurai, then Pudukkottai, Thanjavur, and Tiruchchirappalli again and ended his tour in Madras on 30 April 1858. This photograph is part of the album he produced of Trichinopoly. It shows a bridge over the Cavery River stretching into the distance, the water between the arches carefully framing its reflection.

This black and white photograph shows a large bridge stretching across the page from left to right. In the foreground there is a large puddle, with a reflection of the bridge inside. Behind are some smaller puddles, and in the distance, trees and a hill (the Rock Fort Temple).

This photograph was given by Lady Denison in 1889 during the keepership of Caspar Purdon Clarke, Keeper of the Indian Section of the V&A. It was written off in 1937, and rediscovered and re-evaluated in the 1990s. See Dewan p.368 for listings of other copies elsewhere.
This photograph was published as plate I of nine in the album Photographic Views in Trichinopoly 1858, by 'Captain L. Tripe, Government Photographer', published in 1860. It was taken as part of Tripe's remit as the government photographer, which he himself defined broadly, as recording, ‘before they disappear’ buildings, sculptures and inscriptions…' including the picturesque. This was a model for an extensive survey, including tuition of others and experimentation in his own practice. He was funded by the Madras government, but intended selling additional copies of some prints so that his practice could be self-funding. Unusually, the prints in this album were published without any accompanying text.

Photograph, No. I 'The Bridge from the North Bank of the Kaveri', from the photograph album by Capt. Linnaeus Tripe, 'Photographic Views in Trichinopoly'; South India, 1858 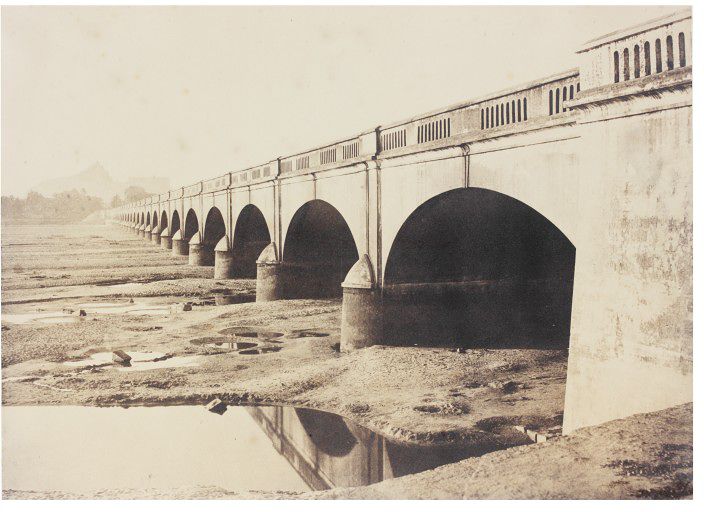