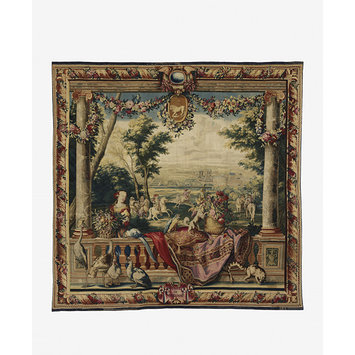 This tapestry is from a series representing twelve of Louis XIV’s royal residences during different months of the year, with the King shown hunting with his retinue in the grounds of his chateaux. The composition puts these outdoor scenes into the background, with the foreground dominated by a display of abundance, both the bounty of nature and the luxury of court life. The textiles and other precious objects laid on the balustrade are known to have been drawn from Louis’ treasury, and the animals and birds from his menagerie. The series was conceived and designed by Le Brun, but many artists collaborated by providing the details in which they specialised, such as floral arrangements.

The first set of Les Maisons Royales was made in the workshop of Lefebvre and Jans in 1668. Between then and 1713 the Crown commissioned seven complete sets of this popular subject, woven with gold thread. A number of other less lavish sets were commissioned by private individuals. The set of tapestries to which this example belongs was probably such a private order late in the 17th century, from the workshop of Jean de la Croix. Its border is without royal emblems, and it is smaller in dimensions than the royal sets.

Tapestry of woven wool and silk. A well-dressed woman stands behind a balustrade supporting a basket of fruit Alongside are two blue parrots, a silk cover with elaborate borders, a tasselled cushion embroidered with metal thread and a small dog investigating the contents of an urn filled with flowers. In the front of the balustrade are four large birds, at the left, and an animal, at the right. The scene behind is of the King Louis XIV and his courtiers hunting, with the Château de Vincennes in the background. To either side of this scene, a marble column supports an architrave, from which hangs swags of flowers and the Zodiac sign for July, Leo.

There is a narrow border of acanthus leaves in gold spiralling with flowers in natural colours, with an outer edge of guilloche. At centre top is a blue cabochon in a winged cartouche; there is also a cartouche at centre bottom, partly obscured by blue ribbons, with the inscription CHASTE[AU, obscured] DE VINCENNE.

Tapestry woven in wool and silk

The set of tapestries to which this belongs, in a border without royal emblems, and reduced in dimensions, was probably a private order late in the 17th century; it is not listed in Fenaille.
The first set of Maisons Royales was made in the workshop of Lefebvre and Jans in 1668. The series was conceived and designed by Le Brun, but many artists collaborated by providing the details in which they specialised. A memoir by Jan Jans the Younger from 1691 described the series, gave the subjects of the twelve compositions, and named the painters responsible for the large figures, carpets and drapery, flowers and fruit, animals and birds, architecture, small figures and landscapes of the cartoons. (Fenaille p.129)
Full-scale paintings of the series are in the collection of the Musee des Arts Decoratifs, Paris. 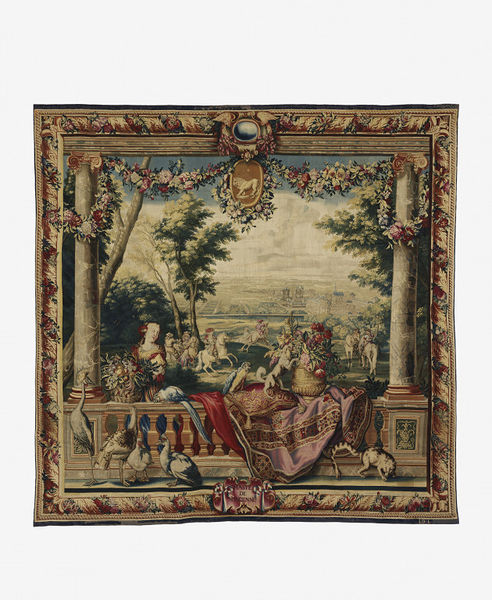