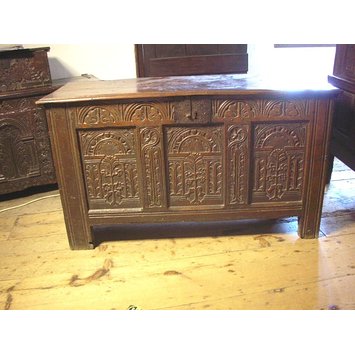 Domestic chests were often used for storing clothing, bedding and linen, and are often recorded near bedchambers or standing at the foot of a bed. Chests of panelled construction with carved fronts, like this one, were comparatively high-status products during the 16th and 17th centuries, being very robust as well as attractively carved with a wide variety of ornament. Designs for carving varied from area to area. The choice of motifs on this one, especially the plants in the middle of the three front panels, suggest that it was made in the south-west of England.

The lid consists of two planks, with moulded edges on the sides and front, held on 2 modern strap hinges (replacing staple hinges).
The front with three panels carved with egg and dart arches on palmette pilasters, containing a stylized flower, set against a crudely punched ground, separated by muntins carved with palmette topped by a rosette, with a freize above carved with lunettes. The lower rail with stopped chamfer. The front legs with a scratch moulding, and cut with a groove on their inside face run down to the ground, the PR foot with a circular mortice containing the remains of a tenon, possibly indicating reused wood. The back of 3 plain panels, with riven external surfaces. The ends with two plain panels below a continuation of the front frieze with lunettes. The bottom is constructed using four oak boards (9-10mm thick) arranged front to back, with bird's mouth joints, nailed up.
Fitted with an early iron lock on modern screws (not examined internally).

TM
Stamped on both front legs

Bought (with key) for £18 from William Savage, Arch House, Henton, Wells, Somerset (RF19/2740. 5210). Condition: "split, chipped, parts missing". The chest was offered for sale with an oak bedstead (of the first half of the 17th century), as an 'oak chest to match', believed by H. Clifford Smith to be a 'good specimen, and probably of the same date as the bed - about 1630-1640'. The bed was declined, as having been altered.

See A Wells-Cole, Oak Furniture from Gloucestershire and Somerset, (Barnard Castle, 1976).
See also Chinnery 3:373 (c.1640), 4:193 Anglo-American; and David Knell, English Country Furniture 1500-1900 (Woodbridge 1992), no.43
The stylised plant stems are broadly characteristic of SW England, Gloucestershire in particular, while most other features such as the lunettes and palmette are found widely. 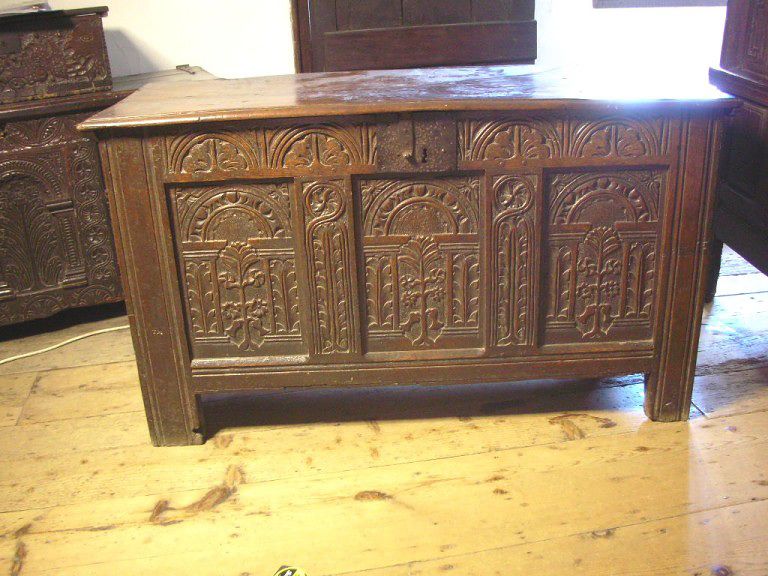