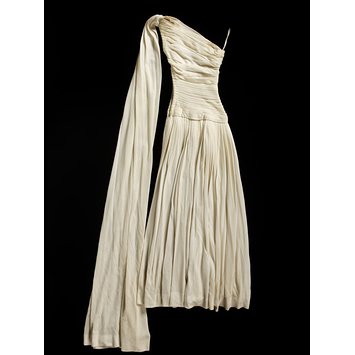 This is a quarter-scale couture reproduction of a late 1940s Madame Grès evening dress. Grès was famous for her mastery over silk jersey. She made it into flawlessly draped Grecian goddess evening gowns such as this, which became her signature style.

These scaled copies use the same fabrics and show the same superb craftsmanship as their full size equivalents. We have four of these miniature dresses which the donor acquired from the archive of the wholesale house of Dorville. Wholesalers would buy the copyrights to couture dresses so that they could sell modified ready-to-wear copies. It is thought that these quarter-scale dresses were sold alongside the patterns to show how the dress looked when made up.

'89'
Handwritten number on linen tape inside skirt. Could be 68, but the underline indicates 89.

Given by David Sassoon of Bellville Sassoon Lorcan Mullany, who acquired these from the ready to wear house of Dorville in the early-mid-1970s.

Madame Grès (1903-1993) was one of the great couturiers of her time. She launched as "Alix" in ca.1934 , and worked under that name until 1939. Her sense of proportion and her taste for strong dramatic statements soon manifested themselves in her designs. After 1939, she started working as Madame Grès. The Grès signature is most clearly seen in her Grecian gowns of pleated jersey. Her column dresses of silk jersey, a challenging fabric to work with, are immaculately pleated, draped, and controlled with a masterly hand. She continued to work in jersey throughout her career, making it her signature fabric. In addition to this example, we have at least three full-size examples of her jersey dresses, including T.250-1974 and T.246-1974, which are both white jersey, the former from 1968, the latter a 1971 Grès replica of a 1955 design. The third dress is a 1977 yellow jersey dress, item T.34-2979.

According to donor, these dresses were bought with the toiles by wholesale companies who copied and adapted these dresses for the ready to wear market. During the post-war fabric shortages, items such as this would have provided a way to show a wholesale-purchaser what the dress looked like without the expense of making a full-size dress with all the attendant usage of fabric. The ready to wear houses and representatives would buy couture models to reproduce and copy.

What is clear is that they are amazingly well-made, beautifully hand-finished, exact scale models of couture dresses, using the same fabrics as their full size equivalents.

These dresses were made for the wholesale company Dorville to show what the garments would look like without the expense of a full size model. 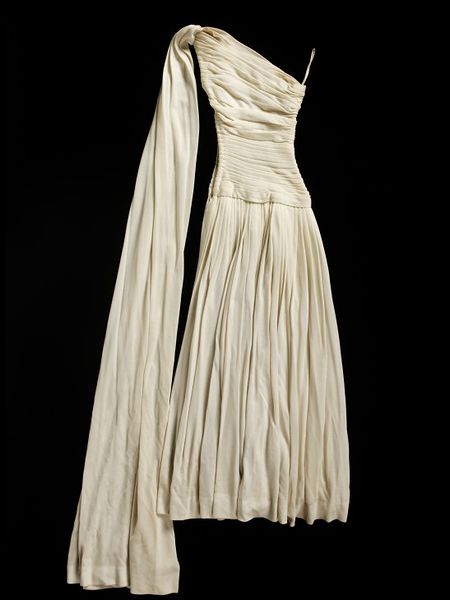