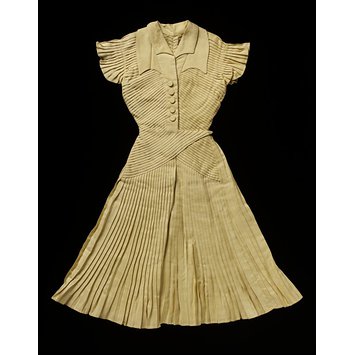 This is a quarter-scale couture reproduction of a late 1940s Jacques Fath afternoon dress. Fath designed his clothes to emphasise and flatter the feminine figure. Here, tightly pleated yellow silk tussah clings about the hips, flares out at the hemline, and lends elasticity to the small-waisted bodice.

These scaled copies use the same fabrics and show the same superb craftsmanship as their full size equivalents. We have four of these miniature dresses which the donor acquired from the archive of the wholesale house of Dorville. Wholesalers would buy the copyrights to couture dresses so that they could sell modified ready-to-wear copies. It is thought that these quarter-scale dresses were sold alongside the patterns to show how the dress looked when made up.

Miniature afternoon dress. Yellow silk tussah, entirely pleated except for double collar and front bodice facings. Yoke extended from front facings to double as collar. Five covered buttons down front facing, concealing press studs. No armscye seam, shoulder fabric of bodice horizontally knife pleated with cap sleeves incorporated. These are held in place with tape attached to interior. Waist seam straight across front, but U-curve in behind. Pleating of bodice, front and back, radiating sunray-style with collar as focus. Front of hips of skirt feature overlapping panels of curved knife-pleated fabric, top layer held in place with a snap at left hip.Pleating of skirt causes hem to flare out. Unlined except for panels on skirt and reinforcing tape on armscyes.

Given by David Sassoon of Bellville Sassoon Lorcan Mullany, who acquired these from the ready to wear house of Dorville in the early-mid-1970s.

According to donor, these dresses were bought with the toiles by wholesale companies who copied and adapted these dresses for the ready to wear market. During the post-war fabric shortages, items such as this would have provided a way to show a wholesale-purchaser what the dress looked like without the expense of making a full-size dress with all the attendant usage of fabric. The ready to wear houses and representatives would buy couture models to reproduce and copy.

What is clear is that they are amazingly well-made, beautifully hand-finished, exact scale models of couture dresses, using the same fabrics as their full size equivalents.

These dresses were made for the wholesale company Dorville to show what the garments would look like without the expense of a full size model. 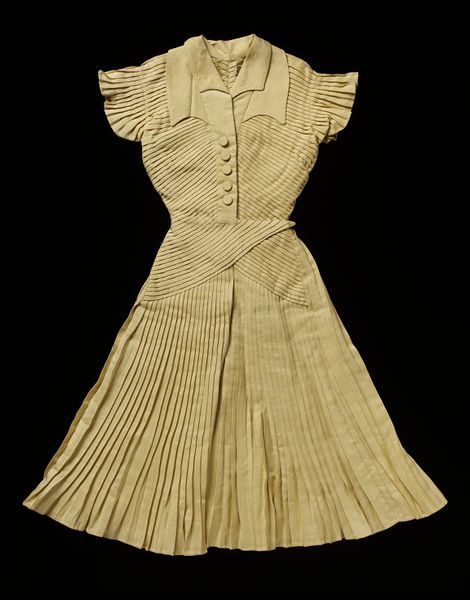