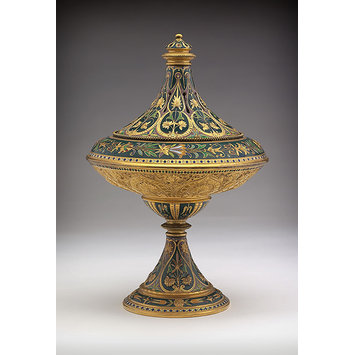 This enamelled perfume burner was made by Elkington and Co. in around 1873. The body is of electroformed copper which has been electrogilded and enamelled in varying shades of green, red, blue and mauve. The perfume burner was designed by AA Willms, Elkington's chief designer, and is from a model that was shown at the Vienna Universal Exhibition in 1873. It comes from a series of electroformed items including vases and plates that Elkingtons made and enamelled inspired initially by a typically eclectic mix of medieval European and early Islamic art but later by Japanese and aesthetic movement cloisonné and champlevé enamels. The perfume burner is from the transition towards more aesthetic styles of the late 1870s but its debt to medieval examples is still obvious.

Shallow circular bowl with partially enclosed rim supported by a hemisherical boss above a trumpet-shaped foot, with a separate trumpet-shaped lid pierced halfway up with ventilation slots, topped by a circular finial also with pierced ventilation holes. The foot and the lid are decorated with a series of gilded ovals topped by cusped leaf patterns inspired by Persian ornament. The surface is enamelled in deep green, with details picked out in blue, grey, red, green and mauve enamels. The bowl has a band of deep green enamel on the rim, decorated with delicate running foliage picked out in green, turquoise and red enamel. The underside of the bowl is gilded and is clear of enamel and shows in relief a series of cusped arches decorated inside and out with flowers.

The inside of the bowl has a hemispherical lining fixed through the foot via a threaded stem which is attached using a circular insert in the foot and a nut. The interior of the bowl, the lid and the foot show the raw, nodular surface of the electroform, which has been deposited into an open-faced mould.

Gilt copper, electroformed and enamelled and assembled using an extended, threaded stem screw to the base

This item, made by Elkington and Co. of Birmingham in around 1873, has been variously described as a perfume burner, a pot pourri and a tazza. The body is of electroformed copper which has been electrogilded and enamelled in varying shades of green, red, blue and mauve. The pierced slots in the lid suggest it was designed for scenting rooms. A clue to its identity is in one of the two Elkington Visitors' Books that survive in the National Art Library. One records the purchases made by visitors at the Elkington stand at international exhibitions between 1855 and 1878. On 29 December 1876, at the Universal Exposition in Philadelphia, a Mrs Alexander Thomson of Albany was recorded buying "1 end. Perfume burner $135 Duty paid." If this is the model to which the purchase refers, it is likely that the item was intended as largely ornamental: there are no fixtures inside for burning.

The perfume burnerwas designed by AA Willms (1823-99), Elkington's chief designer, and is from a model that was shown at the Vienna Universal Exhibition in 1873. It comes from a series of electroformed items including vases and plates that Elkingtons made and enamelled, inspired initially by a typically eclectic mix of medieval European and early Islamic art but later by Japanese and Aesthetic Movement cloisonné and champlevé enamels. The perfume burner is from the transition towards more aesthetic styles of the late 1870s but its debt to medieval enamels and Renaissance models is still obvious. One can see, for example, the influence of pieces like the Balfour Ciborium (V&A, Mus. No. M.1-1981) for the arrangement of the enamels and pieces like the Limoges enamel tazza, formerly in the collections of Horace Walpole and William Beckford and acquired by the Museum in 1910 (V&A, Mus. No. C.2460&A-1910), for the form.

One can also note the similarity with contemporary examples that were also inspired by objects from the past, attesting to the contemporary market for this material. The award-winning, damascened iron cup and cover by the Liege metalwork, Joseph Faloise, which the Museum bought from the Great Exhibition in 1851, is one example (V&A, Mus. No. 6745:1,2-1851), as is the painted enamel cup and cover by Minton & Co. of Stoke, acquired by the Museum in 1858 (V&A, Mus. No. 4773&A-1858).

The perfume burner was made by a process of electroforming. Electroforming involves depositing a metal in solution, in this case copper, into a mould by electrolysis until enough has been transferred that when the object is removed from the mould it can be self supporting. Moulds for electroforming in this way are single open-faced moulds. The impression deposited into the moulds is extremely crisp and accurate, while the surface of open face is characteristically granular and rough.

Elkingtons made both cloisonné and champlevé enamels. In the former, fields enclosed by wire on the surface of an object are enamelled. In the latter, the fields for enamelling are dug from the surface of the already formed object. Electroforming, developed and made commercially viable by Elkingtons, enabled them to mimic cloisonné enamels extremely accurately. Forming an object with the fields already in the mould effectively created a new form of champlevé enamelling, but so accurate are the impressions in the moulds, that wire could be mimicked convincingly.

The V&A owns several Elkington enamelled vases that were shown in 1876 in Philadelphia (eg. V&A Mus. No. 562-1877) and they so accurately resemble cloisonné enamels it is almost impossible to tell whether they are 'real' cloisonné or whether the fields for enamelling have been electroformed into the object. They are also lined and sealed so that one cannot see the construction method. Unusually, the perfume burner shows the contruction clearly as the underside of the bowl has been electroformed and left clear of enamel giving a detailed view of the substrate. The inside of the bowl and the underside of the lid and foot are also left raw so the open-face of the electroform is visible. The perfume burner is a very good example of electroforming being used as a means of production for contemporary art during the 19th century rather than simply the replication of old works as is often erroneously assumed from the impression given by the electrotypes collection.

The Los Angeles County Museum of Art owns another of these perfume burners (Museum No. M.2001.140.1a-b) while another was sold at Christie's, South Kensington (Christie's Interiors, Sale no. 10639; Lot no. 397) to Sinai & Sons of London. All are identical in construction because they were electroformed from the same model, but each has a unique arrangement of coloured enamels.

Elkingtons' production of enamels was relatively short-lived. The opening up of trade relations with Japan made it easier to import Japanese enamels than to imitate them. Electroforming cut out a large proportion of the labour involved in preparing the fields for enamelling, but there was no quicker way of producing the enamels. By the 1880s Elkingtons had more orless ceased to produce these works.

Two other survivng versions of this model are stamped on their undersides with the pattern number 1013. 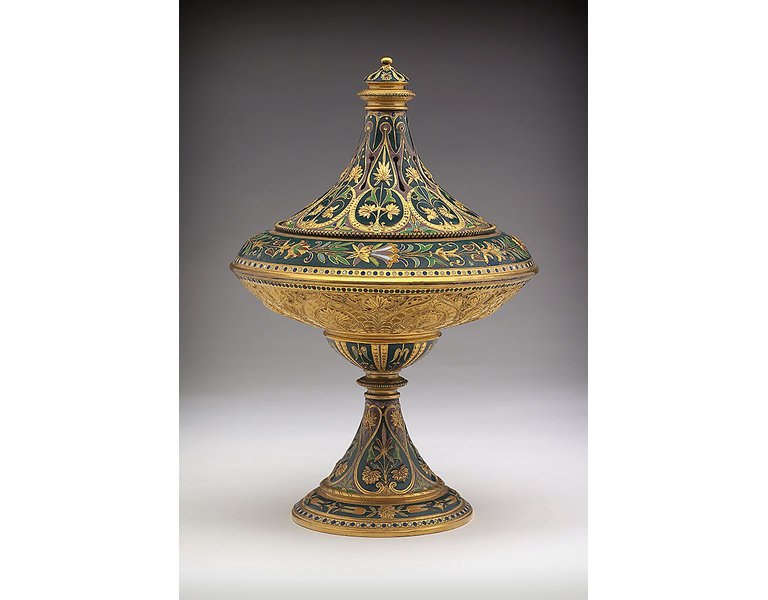