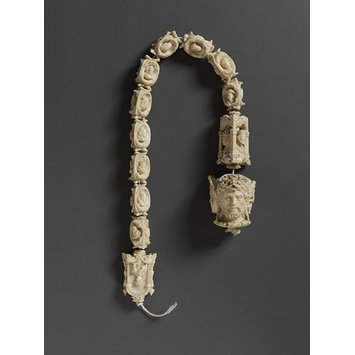 This is an ivory chaplet made in France or South Netherlands in about 1530. The beads are carved with figures of the Virgin Mary and St John the Evangelist, the joined heads of a man, woman and Death, and images of the Pope, kings and figures in aristocratic dress. The Italianate ornament in which these images are set is characteristic of the style considered fashionable by sophisticated French purchases of such luxury items around 1550.

Considered all together the beads constitute a sculptural equivalent of the Office of the Dead found in contemporary Books of Hours, and indeed the extensive choice of figures, including the fool and what may be taken as members of the various ecclesiastical, courtly and professional hierarchies, echoes that found in the margins of Philippe Pigouchet's Book of Hours of the late 1490s.

In the Late Middle Ages the chaplet was a vital and commonplace aid to keeping count of the repetition of prayers for both rich and poor. Often hung from the belt by a ring, it usually consisted of ten ‘ave’ (Hail Mary) beads with a larger ‘paternoster’ (Our Father) bead at the beginning or end and a terminal Crucifix. Chaplet beads were made in many materials, from humble plain wood to precious metals and ivory. The popularity of the rosary – the fullest form of repeated prayers – gave rise to the establishment of confraternities devoted to its use in the late fifteenth century, so that by the sixteenth century the production of intricate and costly chaplets was widespread.
Chaplets often ended not with a cross but with a terminal pendant, and it is these larger beads which are usually the grandest. Most of them are connected with the notion of the memento mori, a constant reflection that human life is transient. The most common type of memento mori bead is that with conjoined heads: the skull, representing Death, is always present, and is either backed with a single bust or a pair of heads, male and female. The depiction of the skull often allowed the carver’s imagination full rein, with toads, worms and lizards crawling in and out of the mouth and eye sockets.

The chaplet is made up of ten small beads, two larger beads at top and bottom, and a terminal memento mori pendant at the lower end, each carved with three heads. The uppermost bead, is a flat panel, with, on one side, the Virgin, on the other, St John the Evangelist (this is a modern insertion). The ten small beads take the form of leaf-covered nuts and all contain three busts in oval quadrilobed niches. The larger three-sided bead below, in the form of an aedicule with a coloumn at its centre, contains a pope, a king, and an emperor.

At the bottom, the memento mori pendant consists of three conjoined heads, a bearded man with wreath, a skull with worms curling out from his mouth, also with wreath, and a young woman with plaited and knotted hair. Where their heads meet above there is a triple leaf form and on the underside is a foliate cup.

France (or South Netherlands, made)

Historical significance: The beads of a rosary are made from a variety of materials, such as amber, glass et. al. Only a few examples in ivory dating from the beginning of the sixteenth century survive (New York, Metropolitan Museum, Rangers House, London) Their Italianate ornament in which the images are set is chracteristic of the style considered fashionable by sophisticated French purchasers of such luxury items. The immaculate condition probably suggests that the rosary was never used but regarded as a piece for a cabinet of curiosities.

Chaplets or rosaries serve for private devotional practice by counting the prayers of Hail Mary. 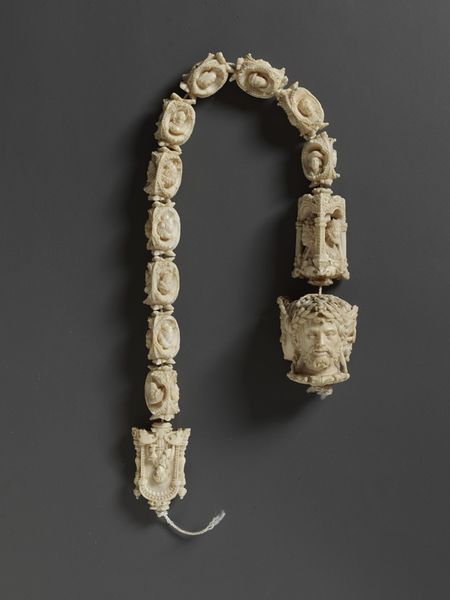