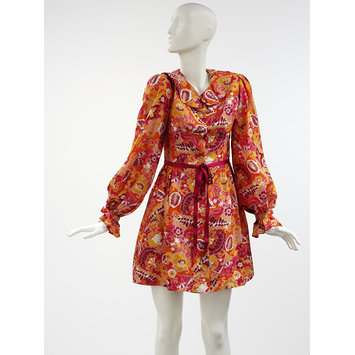 The late 1960s celebrity boutique phenomenon saw popular teenage idols launching clothing lines and boutiques. These included singer Sandie Shaw, TV presenter Cathy McGowan, and even the footballer George Best. Such ventures tended to be short-lived, lasting a few years or even months, like the Beatles' "Apple" boutique, which closed in July 1968 after 7 months.

The famous 1960s model, Twiggy, launched her fashion label 'Twiggy Dresses' on 16 February 1967. Each garment, costing between £6 and £13, came with a free Twiggy portrait hanger. The shops showed them on Twiggy portrait mannequins, and Twiggy did all the modelling and publicity. She worked with the young designers, Paul Babb and Pamela Proctor to ensure they designed clothes she would happily wear herself, such as this brightly patterned mini-dress. This personal input and strong branding enabled the label to run successfully for three years.

Button through mini dress with long bloused sleeves. Rounded neckline. Deep ruffle around collar and on each wrist, overhanging hand. Band of fabric sewn to each wrist which buttons around the wrist and emphasises the flounced cuff and the bloused sleeve. The fabric is a vibrant, psychedelic print of flowers, leaves and foliage, in white, burnt orange, pale pink, fuchsia, magenta, and pale orange. The main body of the dress is lined in white. There is an associated length of wine-coloured velvet ribbon with the dress, which is apparently its original ribbon belt. Label in back of neck reads TWIGGY (spelled out in red dots)

Bought by the donor in the late 1960s, possibly from a small boutique or a department store.

Lesley Hornby, aka Twiggy, the iconic 60s model, launched her dress label on February 16th, 1967. This was a commerical venture that was perhaps rather more well-backed and planned than most, at least in the beginning. In September 1966, the dress manufacturers Berkertex feted her, flying her out to Tunisia to sign a contract, but when she found that she would have no input in the designs bearing her label, she decided to go ahead and create her own range, but with a company that would allow her more design input.

This company turned out to be Taramina Textiles, a company run by Leonard Bloomburg and Sydney Hills. They were completely new to the teenage market, having "made old lady frocks and wedding dresses" up until then. In Twiggy's words: "The teenage market was something quite new to them which was great for us, as it meant no pre-conceived ideas or old stock to get rid of. Right from the start it was agreed everything would be things that I would be happy to wear."

Two young designers were found who had just graduated from the Royal College of Art, Paul Babb, and Pamela Proctor, and they interpreted Twiggy's ideas into designs for the line. "We made sure the dresses were really good and they were all things that I would be happy to wear." Prices ranged from 6 to 12 guineas, which was quite expensive at the time, but the celebrity connection was paramount. Each garment came with a free portrait hanger bearing Twiggy's face and the logo.

The launch was a major success, particularly in the USA. 150 outlets in America expressed interest in stocking the clothing, as long as Twiggy was part of the package, and so she flew out to launch the range there. Her visit was filmed by ABC Television as a series of three documentaries. However, while orders reached the million-dollar mark before Twiggy had even left New York, there was no American manufacturer's backing of the label. As a result, there were pirated copies flooding the market before Taramina Dresses could start supplying these huge orders.

Twiggy Dresses came to an abrupt end in 1970, when, during a visit to the manufacturers, Twiggy went into the stockrooms to look at the new designs, and found the dresses all had a new label - "Miss T". It emerged that the manufacturers had been fulfilling the dress orders with half "Twiggy" and half "Miss T" designs - which Twiggy had no input or financial involvement with. The line terminated shortly afterwards.

However, for Twiggy Dresses to have lasted three years is very good going in the world of late 60s celebrity boutique fashion. Many teen idols started boutique or clothing lines, including singer Sandie Shaw and TV presenter Cathy McGowan. Even the footballer George Best launched his own boutique. The most notorious of all the celebrity boutiques, however, is perhaps that of The Beatles. Their boutique, "Apple", which stocked clothes designed by The Fool, only lasted for 7 months, went bankrupt, and closed ignominously, with the stock literally being given away to anyone who walked in. 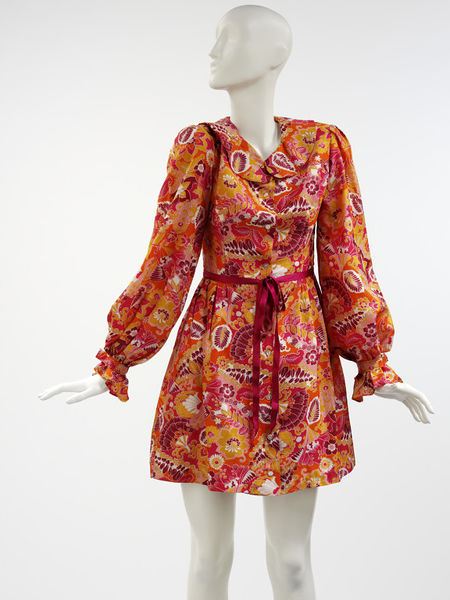