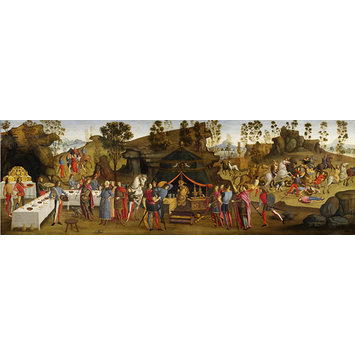 The Magnanimity of Alexander the Great

Davide Ghirlandaio (1452-1525) was born in Florence. A painter and a mosaicist, he assisted his brother Domenico (1448/9-1494) in running a successful workshop and collaborated with him as soon as 1480 on several commissions. He also produced many important works on his own. He trained his nephew, Ridolfo, Domenico’s son, who soon became an important member of his shop.

Sebastiano Mainardi (1466-1513) was born in San Gimignano not far from Florence where he became a pupil of Domenico Ghirlandaio in the 1470s. He later married the brothers’ half-sister, Alessandra and worked on his life in the Ghirlandaio’s workshop.

This panel shows an episode from the life of Alexander the Great, narrated in the Parallel Lives of the Roman ancient author Plutarch, retelling Alexander's victory over Darius and his subsequent act of magnanimity with his enemy's family. While the story took place in the 4th century B.C., the figures and the setting are presented in a Renaissance fashion. This panel was most likely made to celebrate a patrician wedding and illustrates therefore a heroic virtue such as magnanimity that was much sought after by the Renaissance elite. The present painting forms a pendant with E.372-2006 as they represent the lives of two heroes respectively Greek and Roman, the two civilisations that dominated the Antique Western World.

A large rectangular panel depicting a series of events from right to left: a battle scene with horses, in the middle, a tent in which are exposed golden vessels with figures, a table laid for a banquet with many figures around and above a scene of women captured.

[H]OCCINE [I]M[P]ERAR[E] ERAT
Is this what it was to rule?
Inscribed on the tablecloth below Alexander's sceptre
Translation Dr Martin Davies and Dr Jill Kraye

Accepted by HM Government in lieu of Inheritance Tax and allocated to the Victoria and Albert Museum. On permanent loan to Longleat House, Wiltshire.

Historical significance: This panel, along with E.372-2006, may have formed a set of spalliere - decorative wainscoting typically made for ornate bedchambers during the 15th century in Italy - for the Palazzo Piccolimi in Siena. As it is slightly taller than a usual spalliera, this panel may have been placed above a bed, as a lettuccio.
These two panels are currently on loan to Longleat House, Warminster, and are part of a Neo-Renaissance decor in the State Drawing Room designed by Crace in 1877, as a setting for the 4th Marquess of Bath's collection of Italian pictures.

The panel celebrates an episode from the life of Alexander the Great, as recorded by Plutarch in the Parallel Lives (33:21). The panel follows Plutarch's description, with, on the right, Alexander's troups defeating Darius' army at the Battle of Issus (November 333 B.C.), with Alexander represented in golden armour astride his horse among his soldiers, while a chariot in the background, surmounted by a golden armour and trophies, probably Darius', which may allude to Alexander's victory over Darius. In the middle of the composition stands Darius' tent, 'full of splendid furniture and quantity of gold and silver' as Plutarch wrote, now the booty of Alexander, who displays Darius' armour. Alexander, according to Plutarch, then entered a pavilion of great size, 'where the couches and tables and preparations for an entertainment were perfectly magnificent'. Here, the banquet in the open air, visible at the left, is represented in Renaissance fashion, with long tables and servants presenting dishes. Plutarch adds that Alexander was then informed, probably by the man in blue standing beside him, that Darius' mother, wife and two unmarried daughters, depicted in the background, had been taken among the prisoners. In 15th century Italian narrative paintings, it was common, as here, for more than one consecutive event from the same story to be represented.

Luke Syson associated the present panel with a passage from Vasari's Lives of the most eminent painters, sculptors & architects, published in 1568, in which it is mentioned that "Domenico [Ghirlandaio] and Bastiano [Mainardi] were together in Siena and painted a tempera in a Spannocchi palace's bedchamber a series of stories with many small figures". Domenico was never recorded as being in Siena, but his brother Davide did work there with Sebastiano in 1493 on the now lost mosaics for Siena Cathedral.

The Spannocchi arms, three ears of corn on a red ground, including Piccolomini's five half-moons on a formerly blue ground, is represented on Alexander's tent. This attribution is strengthened by stylistic affinities that both Davide, his brother, and Sebastiano, his brother-in-law, shared with Domenico Ghirlandaio.

According to Tatrai, this picture, as well as E.372-2006 and the three panels depicting the Story of the Patient Griselda in the National Gallery, London, were commissioned for the double wedding, on 11-17 January 1494, of Antonio and Giulio Spannocchi, sons of Ambrogio Spannocchi, papal banker to Pius II Piccolomini, to Alessandra Placidi, from Siena, and Giovanna Mellini, from Rome. The names of the heroes represented, Giulio Cesare (Julius Caesar) and Alessandro Magno (Alexander the Great), correspond with the names of the groom Giulio and the bride Alessandra.

Davide Ghirlandaio (1452-1525) was born in Florence. A painter and mosaicist, he assisted his brother Domenico (1448/9-1494) in running a successful workshop and collaborated with him as early as 1480 on several commissions. He also produced important works of his own. He trained his nephew, Ridolfo, Domenico’s son, who soon became an important member of his shop.

Sebastiano Mainardi (1466-1513) was born in San Gimignano, not far from Florence, where he became a pupil of Domenico Ghirlandaio in the 1470s. He later married the brothers’ half-sister, Alessandra, and worked his entire life in the Ghirlandaio’s workshop.

During the fifteenth and sixteenth centuries in Italy, artists were often commissioned to create painted wooden furnishings for the domestic interior, especially for the camera (bedchamber) of wealthy private palaces. Such works were generally commissioned to celebrate a new marriage or the birth of a child and could include a lettiera (bed), spalliera or cornicione (a painted frieze), a cassapanca (bench-chest) and a set of cassone (marriage chests) among other objects and furnishings. The decoration often included subjects associated with fertility, maternity, childbirth, marriage and fidelity and could include references to the patrons through inclusion of their coat of arms and heraldic colours, or of their personal motto or device.