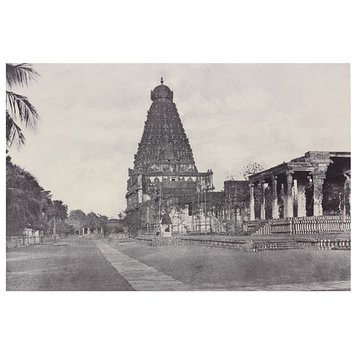 The Central Tower of the Great Pagoda

Linnaeus Tripe (1822–1902) documented much of south India as official photographer to the Madras government (1856–1860). This photograph is part of the album he produced of Tanjore, or Thanjavur. This shows the tallest vimana (sanctuary) in India. It is 62 m high. The Brihadisvara temple was built by the Chola king Rajaraja I, and finished in 1000 AD. Text accompanying the photograph states, with reference to the sculptures that adorn all parts of the buildings, ‘It is a pleasing thing to be able to say after the minutest inspection of the temple in every accessible part, that none of its sculptures, as far as I am aware, are calculated to to [sic] shock the feelings of the most modest…’

This black and white photograph shows a large sanctuary in the centre of the image, with a pillared structure on the right containing a sculpture of a bull within. The steps are striped. There are trees on the left.

This photograph was given by Lady Denison in 1889 during the keepership of Caspar Purdon Clarke, Keeper of the Indian Section of the V&A. It was written off in 1937, and rediscovered and re-evaluated in the 1990s. See Dewan p.477 for listings of other copies elsewhere.
This photograph was published as plate XI of twenty-three in the album Photographic Views in Tanjore and Trivady 1858, by 'Captain L. Tripe, Government Photographer, with Descriptive Notes by the Rev. G. U. Pope', published in 1860. It was taken as part of Tripe's remit as the government photographer, which he himself defined broadly, as recording, ‘before they disappear’ buildings, sculptures and inscriptions…' including the picturesque. This was a model for an extensive survey, including tuition of others and experimentation in his own practice. He was funded by the Madras government, but intended selling additional copies of some prints so that his practice could be self-funding.

This photograph was published with the following text in the letterpress (the following is an extract):
‘This is one of the finest towers in India. Its base is a square whose side is 32 yards. The height is 92 yards; its shadow does not project beyond the base, an essential matter according to Hindo [sic] opinion in such a building. It covers the innermost shrine or adytum…in which the principal idol is placed….The circular mass at the top is said to be granite (or syenite) and various stories are told about the way in which it was raised to its present elevation. The most probably is that an included plane extending five miles from the base of the temple was built of mud, and that along this the stone was laboriously rolled to its present lofty station. There was plenty of forced labour in those days… It is a pleasing thing to be able to say after the minutest inspection of the temple in every accessible part, that none of its sculptures, as far as I am aware, are calculated to to [sic] shock the feelings of the most modest…’

Photograph, No. XI 'The Central Tower of the Great Pagoda', from the photograph album by Capt. Linnaeus Tripe, 'Photographic Views in Tanjore and Trivady'; South India, 1858 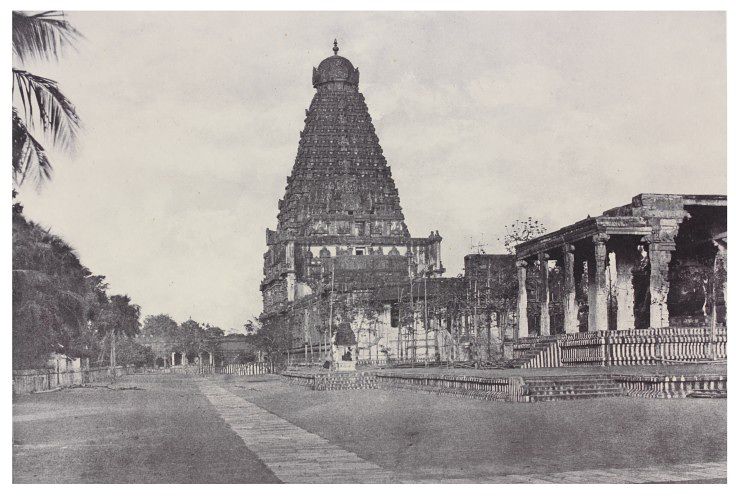