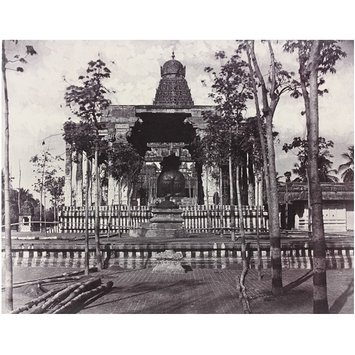 The Great Bull from the Gateway

Linnaeus Tripe (1822–1902) documented much of south India as official photographer to the Madras government (1856–1860). This photograph is part of the album he produced of Tanjore, or Thanjavur, and shows a passageway to the Brihadisvara temple. The sculpture in the centre is Nandi (a bull, a vehicle of the Hindu god Shiva, and a symbol of fertility). It was apparently made in the late 16th century, carved out of a slab of granite 6m long, and guards the entrance to the temple. Tripe has carefully composed this photograph so that the line of trees lead us to the bull right in the centre of the photograph.

This black and white photograph shows the entrance to a temple with the back of a huge sculpture of a bull in the centre. Rows of trees line the two edges of the frame, and a large tower can be seen in the centre background.

This photograph was given by Lady Denison in 1889 during the keepership of Caspar Purdon Clarke, Keeper of the Indian Section of the V&A. It was written off in 1937, and rediscovered and re-evaluated in the 1990s. See Dewan p.476 for listings of other copies elsewhere.
This photograph was published as plate X of twenty-three in the album Photographic Views in Tanjore and Trivady 1858, by 'Captain L. Tripe, Government Photographer, with Descriptive Notes by the Rev. G. U. Pope', published in 1860. It was taken as part of Tripe's remit as the government photographer, which he himself defined broadly, as recording, ‘before they disappear’ buildings, sculptures and inscriptions…' including the picturesque. This was a model for an extensive survey, including tuition of others and experimentation in his own practice. He was funded by the Madras government, but intended selling additional copies of some prints so that his practice could be self-funding.

This photograph was published with the following text in the letterpress (the following is an extract):
‘One of the most striking objects on entering the enclosure of the temple is the Bull, which in an elevated Mandabam, or porch in front of the principal temple, is represented crouching down, as if paying reverence to his great master Siva. Nandi himself (who is incarnate as the bull) is the door keeper of Kailisa, Siva’s abode.
Smaller bulls are to be found in every part of the temple, and the presence of these is the surest sign of a Siva temple…’

Photograph, No. X 'The Great Bull from the Gateway', from the photograph album by Capt. Linnaeus Tripe, 'Photographic Views in Tanjore and Trivady'; South India, 1858 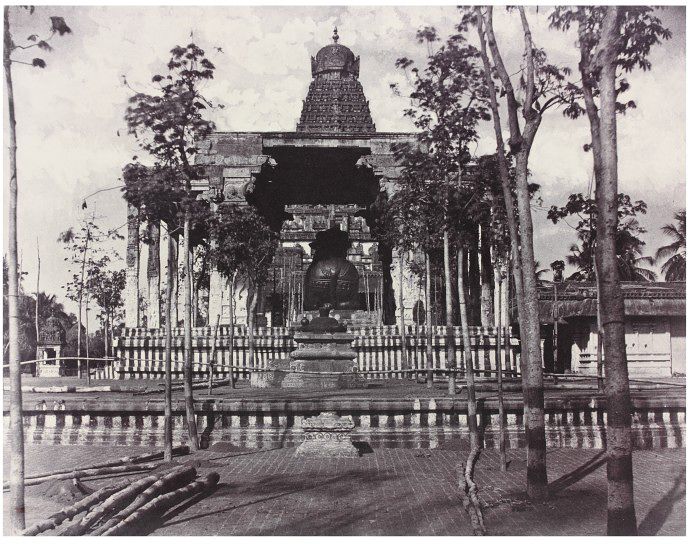