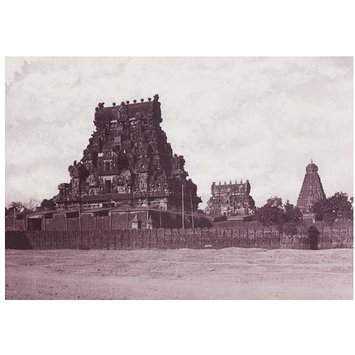 'Great Pagoda from the Fort Glacis

Linnaeus Tripe (1822–1902) documented much of south India as official photographer to the Madras government (1856–1860). This photograph is part of the album he produced of Tanjore, or Thanjavur. Text accompanying the photograph states, ‘The three towers of the Great Pagoda here seen are the entrance towers of the Ganesa [sic] temple, and the great central tower. The outer ones are modern, probably of the time of Serfojee I [ruler of the Mahratta dynasty that governed Tanjore from the seventeenth to the nineteenth century]. There are always five small balls on the towers of Siva temples, symbolic of the five syllables of the sacred formula “saviya nama,” (salutation to [the Hindu god] Siva)…’

This black and white photograph shows three entrance towers to a pagoda, the largest on the left of the frame is triangualar in structure and covered with images of gods. The sky is full of clouds that have been painted onto the negative.

This photograph was given by Lady Denison in 1889 during the keepership of Caspar Purdon Clarke, Keeper of the Indian Section of the V&A. It was written off in 1937, and rediscovered and re-evaluated in the 1990s. See Dewan p.474 for listings of other copies elsewhere.
This photograph was published as plate VIII of twenty-three in the album Photographic Views in Tanjore and Trivady 1858, by 'Captain L. Tripe, Government Photographer, with Descriptive Notes by the Rev. G. U. Pope', published in 1860. It was taken as part of Tripe's remit as the government photographer, which he himself defined broadly, as recording, ‘before they disappear’ buildings, sculptures and inscriptions…' including the picturesque. This was a model for an extensive survey, including tuition of others and experimentation in his own practice. He was funded by the Madras government, but intended selling additional copies of some prints so that his practice could be self-funding.

This photograph was published with the following text in the letterpress (the following is an extract):
‘The three towers of the Great Pagoda here seen are the entrance towers of the Ganesa [sic] temple, and the great central tower. The outer ones are modern, probably of the time of Serfojee I [ruler of the Mahratta dynasty that governed Tanjore from the seventeenth to the nineteenth century]. There are always five small balls on the towers of Siva temples, symbolic of the five syllables of the sacred formula “saviya nama,” (salutation to Siva)…’

Photograph, No. VIII 'Great Pagoda from the Fort Glacis', from the photograph album by Capt. Linnaeus Tripe, 'Photographic Views in Tanjore and Trivady'; South India, 1858 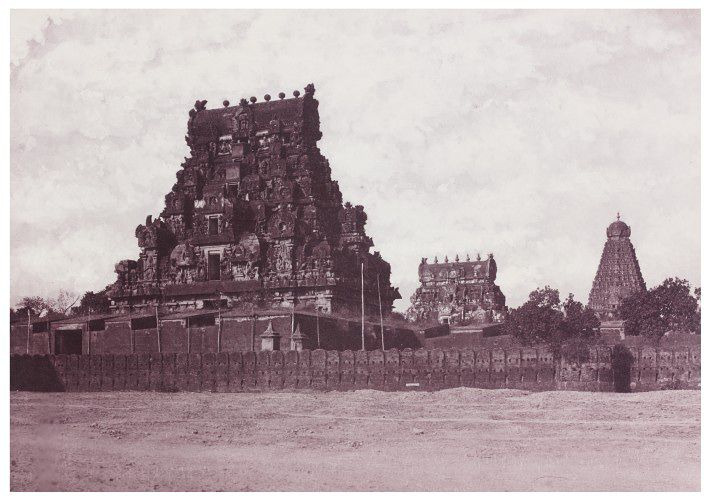