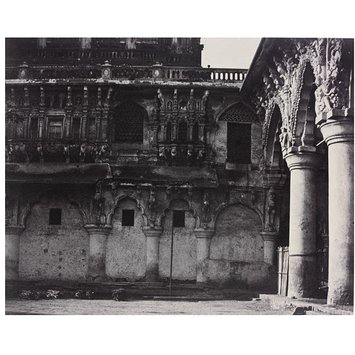 South Facade of the Quadrangle of the Nayakar Durbar Hill

Linnaeus Tripe (1822–1902) documented much of south India as official photographer to the Madras government (1856–1860). This photograph is part of the album he produced of Tanjore, or Thanjavur. Text accompanying the photograph states, ‘This is a very characteristic specimen of the kind of architecture which the Nayakar rulers [the Nayak kingdom lasted from 1565 to 1781] brought from Bijanagar. There is something stately in the lofty pillars, which are every where surrounded by a foliated arch. The side arches now filed up were formerly open and this there was free access to the hall on all sides from the outer court and all the other quadrangles of the palace. Every suitor had access to the sovereign when seated on his throne. Here poets and learned men came to recite their compositions and challenge opponents, the king and his courtiers being the auditors and umpires.’ Tripe has skilfully judged the amount of light this photograph was exposed to, in order to show the detailed carvings in both light and shade.

This black and white photograph shows the corner of a quadrangle, ornately decorated with carvings of figures, animals, and designs. There are decorative arches all of the way round. IN the foreground on the earth floor lie bunches of sticks, possibly firewood.

This photograph was given by Lady Denison in 1889 during the keepership of Caspar Purdon Clarke, Keeper of the Indian Section of the V&A. It was written off in 1937, and rediscovered and re-evaluated in the 1990s. See Dewan p.473 for listings of other copies elsewhere.
This photograph was published as plate VII of twenty-three in the album Photographic Views in Tanjore and Trivady 1858, by 'Captain L. Tripe, Government Photographer, with Descriptive Notes by the Rev. G. U. Pope', published in 1860. It was taken as part of Tripe's remit as the government photographer, which he himself defined broadly, as recording, ‘before they disappear’ buildings, sculptures and inscriptions…' including the picturesque. This was a model for an extensive survey, including tuition of others and experimentation in his own practice. He was funded by the Madras government, but intended selling additional copies of some prints so that his practice could be self-funding.

This photograph was published with the following text in the letterpress (the following is an extract):
‘This is a very characteristic specimen of the kind of architecture which the Nayakar rulers brought from Bijanagar. There is something stately in the lofty pillars, which are every where surrounded by a foliated arch. The side arches now filed up were formerly open and this there was free access to the hall on all sides from the outer court and all the other quadrangles of the palace.

Every suitor had access to the sovereign when seated on his throne. Here poets and learned men came to recite their compositions and challenge opponents, the king and his courtiers being the auditors and umpires. In such a place, Kamban first recited the harmonious, flowing verses of the Tamil Ramayanam.
…But the Nayakar have passed away, and their descendants now wait around the Kacheris [offices, courthouses] of our English officials as peons, or serve in our armies as sepoys.
And, romance apart, it is far better for the people that it should be so’.

Photograph, No. VII 'South Facade of the Quadrangle of the Nayakar Durbar Hill', from the photograph album by Capt. Linnaeus Tripe, 'Photographic Views in Tanjore and Trivady'; South India, 1858 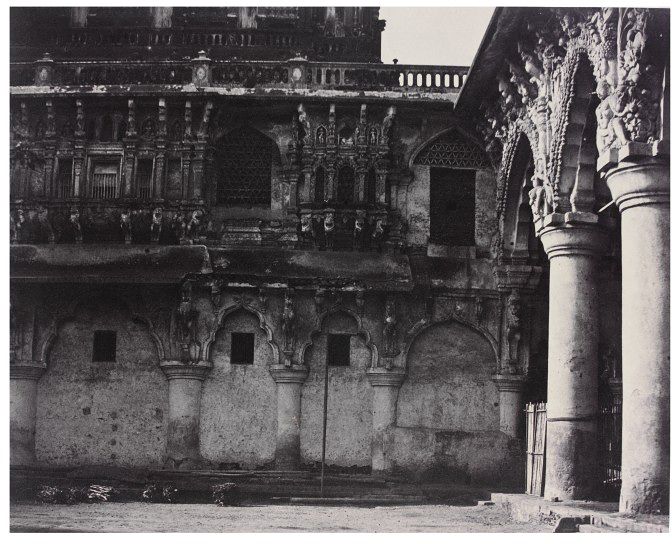