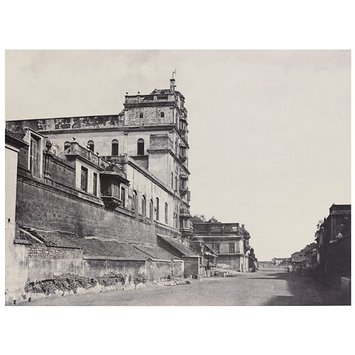 The Seven storied Tower of the Palace

Linnaeus Tripe (1822–1902) documented much of south India as official photographer to the Madras government (1856–1860). This photograph is part of the album he produced of Tanjore, or Thanjavur. Text accompanying the photograph states, ‘This tower seen from a distance has a very fine effect, but this is destroyed by a nearer view. It is a striking mixture of squalor and magnificence. It was built by Serfogee I, who visited Kasi, and saw such a tower belonging to a dancing girl of the temple there…It is a curious mixture of Saracenic and European architecture…' Tripe has drawn clouds onto the negative, which makes the sky seem more interesting.

This black and white photograph shows a road with a large, eurpoean-style building along the row of buildings to the left of the road. Parts of the brick wall are exposed. The buildings on the right of the road are in shadow, and the sky has been painted in with clouds.

This photograph was given by Lady Denison in 1889 during the keepership of Caspar Purdon Clarke, Keeper of the Indian Section of the V&A. It was written off in 1937, and rediscovered and re-evaluated in the 1990s. See Dewan p.470 for listings of other copies elsewhere.
This photograph was published as plate IV of twenty-three in the album Photographic Views in Tanjore and Trivady 1858, by 'Captain L. Tripe, Government Photographer, with Descriptive Notes by the Rev. G. U. Pope', published in 1860. It was taken as part of Tripe's remit as the government photographer, which he himself defined broadly, as recording, ‘before they disappear’ buildings, sculptures and inscriptions…' including the picturesque. This was a model for an extensive survey, including tuition of others and experimentation in his own practice. He was funded by the Madras government, but intended selling additional copies of some prints so that his practice could be self-funding.

This photograph was published with the following text in the letterpress (the following is an extract):
‘This tower seen from a distance has a very fine effect, but this is destroyed by a nearer view. It is a striking mixture of squalor and magnificence.
It was built by Serfogee I, who visited Kasi, and saw such a tower belonging to a dancing girl of the temple there. It occupied 35 years in the erection… It is a curious mixture of Saracenic and European architecture, and the lightning conductor on the top reminds the visitor that some rays of western civilisation have reached even the Tanjore Palace’.

Photograph, No. IV 'The Seven storied Tower of the Palace', from the photograph album by Capt. Linnaeus Tripe, 'Photographic Views in Tanjore and Trivady'; South India, 1858 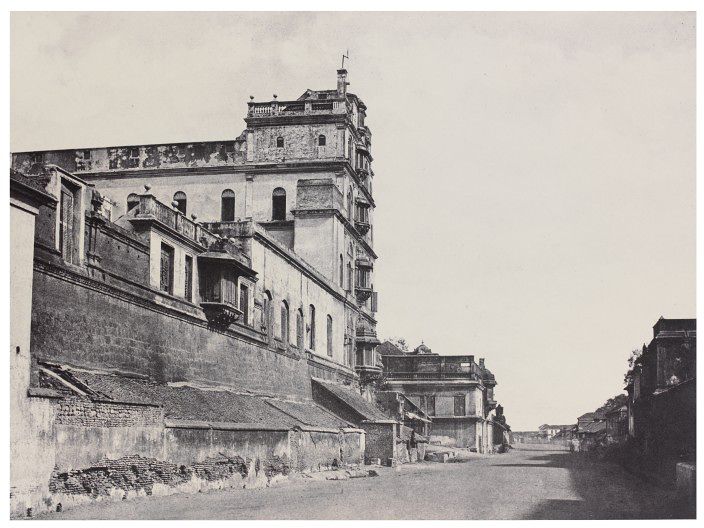