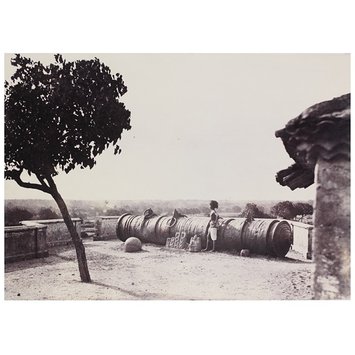 The Monster Gun of Tanjore

Linnaeus Tripe (1822-1902) documented much of south India as official photographer to the Madras government (1856-1860). This photograph is part of the album he produced of Tanjore, or Thanjavur. Text accompanying the photograph states, 'This huge gun is composed of rings of iron welded together and encircled by rings of brass at equal distances…It has recived [sic] the name of Rajah Gopala, and as this is a name of Vishnu it may be inferred that it was made by one of the Vaishnava Nayaka kings. It certainly belongs to that period… Like the monster gun used at the siege of Constantinople by Mahomed I, it would certainly be more terrible to those who fired it than to the enemy…' Unusually there is a child in the photograph, which makes the large scale of the gun clearer to us.

This black and white photograph shows a small child standing in front of a large cylindrical cannon (named Rajagopala, from the early 17th century). There is a tree to the left, and the edge of a hut, very close-up, to the right.

PHOTOGRAPHER TO GOVERNMENT
Tripe's blindstamp is on the lower centre of the mount.

This photograph was given by Lady Denison in 1889 during the keepership of Caspar Purdon Clarke, Keeper of the Indian Section of the V&A. It was written off in 1937, and rediscovered and re-evaluated in the 1990s. See Dewan p.468 for listings of other copies elsewhere.
This photograph was published as plate II of twenty-three in the album Photographic Views in Tanjore and Trivady 1858, by 'Captain L. Tripe, Government Photographer, with Descriptive Notes by the Rev. G. U. Pope', published in 1860. It was taken as part of Tripe's remit as the government photographer, which he himself defined broadly, as recording, ‘before they disappear’ buildings, sculptures and inscriptions…' including the picturesque. This was a model for an extensive survey, including tuition of others and experimentation in his own practice. He was funded by the Madras government, but intended selling additional copies of some prints so that his practice could be self-funding.

This photograph was published with the following text in the letterpress (the following is an extract):
This huge gun is composed of rings of iron welded together and encircled by rings of brass at equal distances…It has recived [sic] the name of Rajah Gopala, nad as this is a name of Vishnu it may be inferred that it was made by one of the Vaishnava Nayaka kings. It certainly belongs to that period… Like the monster gun used at the siege of Constantinople by Mahomed I, it would certainly be more terrible to those who fired it than to the enemy…’

Photograph, No. II 'The Monster Gun of Tanjore', from the photograph album by Capt. Linnaeus Tripe, 'Photographic Views in Tanjore and Trivady'; South India, 1858 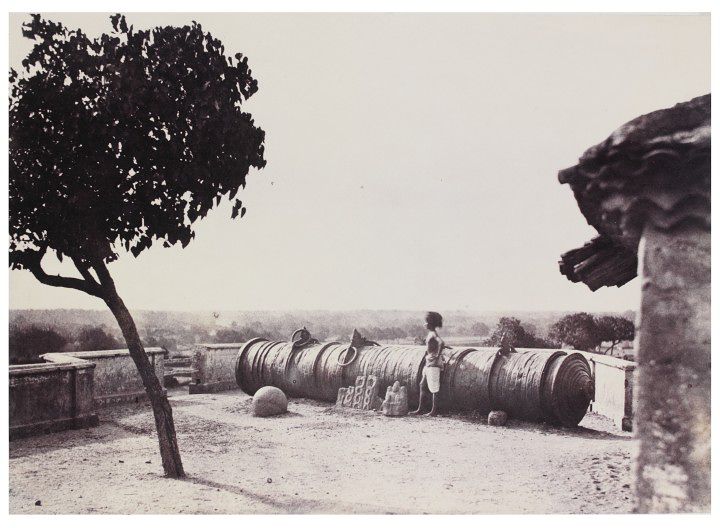