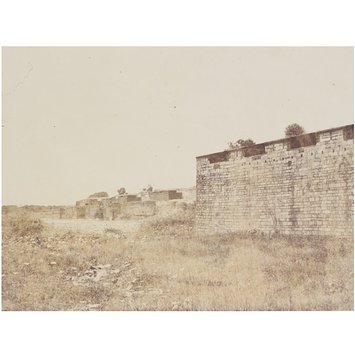 Tanjore Fort, The Wall and Ditch

Linnaeus Tripe (1822–1902) documented much of south India as official photographer to the Madras government (1856–1860). This photograph is part of the album he produced of Tanjore, or Thanjavur. Text accompanying the photograph states, ‘Tanjore Fort was built by the Nayakar Kings of Tanjore [the Nayak kingdom lasted from 1565 to 1781], but has been considerably enlarged by the kings of the Mahratta dynasty. It surrounds the entire city in which there are (exclusive of the suburbs) 20,000 inhabitants. The little fort or citadel contains a tank, the water of which is much esteemed by the people, the large temple, and a Christian church built by Schwartz the Missionary. …Tanjore became the capital of the Soran kingdom early in the 16th century: but it had been a place of great importance for centuries previous, and its rulers had, alternately with those of Mysore and Madura, governed the Southern Carnatic.’ Today the population of Thanjavur is 217,000.

This black and white photograph shows a wall on the right with a grassy foreground, and more buildings in the background. The photo is faded with over half being sky in the composition.

This photograph was given by Lady Denison in 1889 during the keepership of Caspar Purdon Clarke, Keeper of the Indian Section of the V&A. It was written off in 1937, and rediscovered and re-evaluated in the 1990s. See Dewan p.467 for listings of other copies elsewhere.
This photograph was published as plate I of twenty-three in the album Photographic Views in Tanjore and Trivady 1858, by 'Captain L. Tripe, Government Photographer, with Descriptive Notes by the Rev. G. U. Pope', published in 1860. It was taken as part of Tripe's remit as the government photographer, which he himself defined broadly, as recording, ‘before they disappear’ buildings, sculptures and inscriptions…' including the picturesque. This was a model for an extensive survey, including tuition of others and experimentation in his own practice. He was funded by the Madras government, but intended selling additional copies of some prints so that his practice could be self-funding.

This photograph was published with the following text in the letterpress (the following is an extract):
‘Tanjore Fort was built by the Nayakar Kings of Tanjore, but has been considerably enlarged by the kings of the Mahratta dynasty. It surrounds the entire city in which there are (exclusive of the suburbs) 20,000 inhabitants.
The little fort or citadel contains a tank, the water of which is much esteemed by the people, the large temple, and a Christian church built by Schwartz the Missionary.
… Tanjore became the capital of the Soran kingdom early in the 16th century: but it had been a place of great importance for centuries previous, and its rulers had, alternately with those of Mysore and Madura, governed the Southern Carnatic.
Much interesting information regarding Tanjore and its successive rulers may be sifted out of Taylor’s Oriental Historical Manuscripts, Vol. 1.
The Tanjore Purana says that one Tanjan a demon, with his family, were the first settlers, but Hindu myths are constantly invented to account for names of places and persons. It is curious that the prince of a division of the Huns was always called the Tanjou.’

Photograph, No. 1 'Tanjore Fort, The Wall and Ditch', from the photograph album by Capt. Linnaeus Tripe, 'Photographic Views in Tanjore and Trivady'; South India, 1858 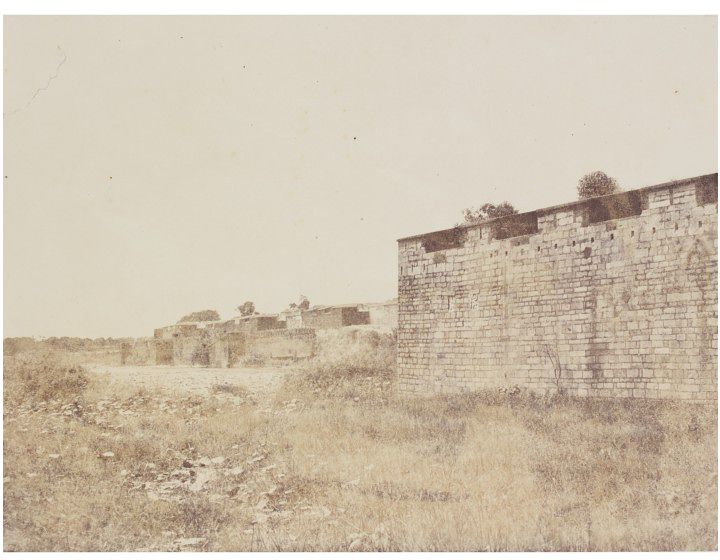