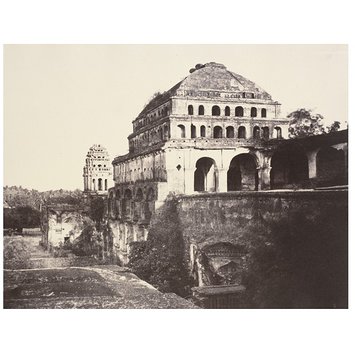 Hall on the Side of the North side of the Quadrangle

Linnaeus Tripe (1822-1902) documented much of south India as official photographer to the Madras government (1856-1860). This photograph shows a view of the dilapidated domes within the complex of the Palace of Trimul Naik (also known as Tirumalai Nayak), who ruled Madurai from 1623 to 1655. The text accompanying the image when it was published in 1860 states 'This is a large hall entirely open from the top of the arch to the floor of the arcade on the North side of the Quadrangle. It is about 70 feet in height from the floor of the arcade, and has a narrow gallery on a level with the terrace and forming a connection [sic] between them. The view represents, distinctly, remains of other parts of the Palace now gone to ruin.' The court in the image was later renovated.

This black and white photograph shows a large domed building to the right, overgrown with shrubs, containing many arches. In the centre distance is a smaller turret.

This photograph was given by Lady Denison in 1889 during the keepership of Caspar Purdon Clarke, Keeper of the Indian Section of the V&A. It was written off in 1937, and rediscovered and re-evaluated in the 1990s. See Dewan p.451 for listings of other copies elsewhere.
This photograph was published as plate X of fourteen in the album Photographs of Madura: Part IV 1858, by 'Captain L. Tripe, Government Photographer', published in 1860. It was taken as part of Tripe's remit as the government photographer, which he himself defined broadly, as recording, ‘before they disappear’ buildings, sculptures and inscriptions…' including the picturesque. This was a model for an extensive survey, including tuition of others and experimentation in his own practice. He was funded by the Madras government, but intended selling additional copies of some prints so that his practice could be self-funding.

This photograph was published with the following text in the letterpress:
‘This is a large hall entirely open from the top of the arch to the floor of the arcade on the North side of the Quadrangle. It is about 70 feet in height from the floor of the arcade, and has a narrow gallery on a level with the terrace and forming a connection [sic] between them.
The view represents, distinctly, remains of other parts of the Palace now gone to ruin.’

Photograph, No. X 'Hall on the Side of the North side of the Quadrangle', from the photograph album by Capt. Linnaeus Tripe, 'Photographs of Madura: Part IV', South India, 1858 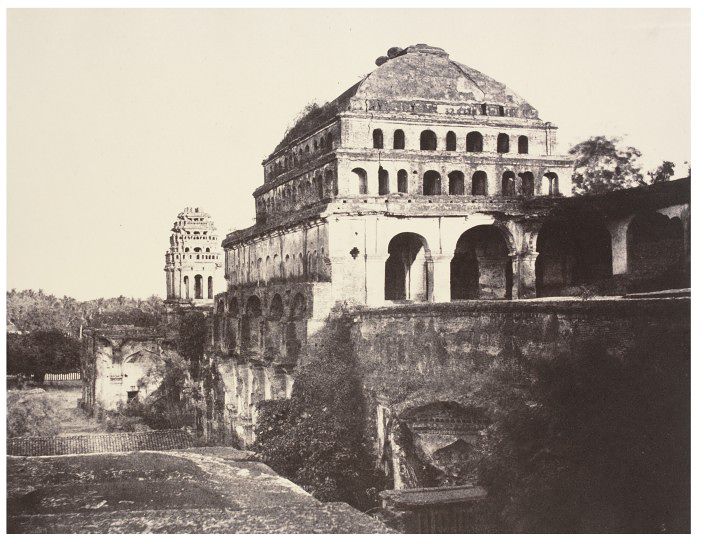