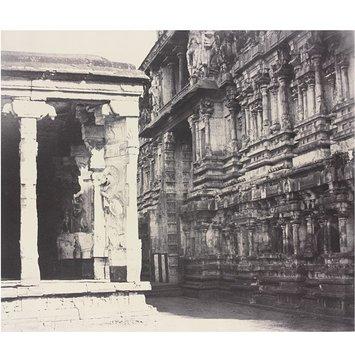 The inner Facade of the gateway of the East Gopuram

Linnaeus Tripe (1822-1902) documented much of south India as official photographer to the Madras government (1856-1860). His album Photographs of Madura: Part III contains fifteen images of the Great Pagoda of Madura, a famous and celebrated piece of architecture. This photograph shows a Mundapam or munduppum (a pavilion, pillared hall, or 'choultry') within the Pagoda complex to the left in bright sunlight, with the east gopurum (gateway) on the right. The accompanying text remarks that the gopurum is 'Built of cut stone to just above the top of the gateway which is about 30 feet high. The Mundapam in front is the Viravasuntarayan entirely of stone, the roof being formed of slabs of granite.'

This photograph was given by Lady Denison in 1889 during the keepership of Caspar Purdon Clarke, Keeper of the Indian Section of the V&A. It was written off in 1937, and rediscovered and re-evaluated in the 1990s. See Dewan p.425 for listings of other copies elsewhere.
This photograph was published as plate VI of fifteen in the album Photographs of Madura: Part III 1858, by 'Captain L. Tripe, Government Photographer', published in 1860. It was taken as part of Tripe's remit as the government photographer, which he himself defined broadly, as recording, ‘before they disappear’ buildings, sculptures and inscriptions…' including the picturesque. This was a model for an extensive survey, including tuition of others and experimentation in his own practice. He was funded by the Madras government, but intended selling additional copies of some prints so that his practice could be self-funding.

This photograph was published with the following text:
'Built of cut stone to just above the top of the gateway which is about 30 feet high. The Mundapam in front is the Viravasuntarayan entirely of stone, the roof being formed of slabs of granite.'

The southern districts tour and Madras presidency photographs, 1857–58
The Madras government appointed Tripe as photographer following the 1855 directive from the Court of Directors in London, who discouraged illustration in favour of ‘photography as a means by which representations may be obtained of scenes and buildings, with the advantages of perfect accuracy, small expenditure of time, and moderate cash’, and asked that photography be the main means of recording architecture and antiquities (Dewan, p.6).

Photograph, No. VI 'The inner Facade of the gateway of the East Gopuram', from the photograph album by Capt. Linnaeus Tripe, 'Photographs of Madura: Part III', South India, 1858 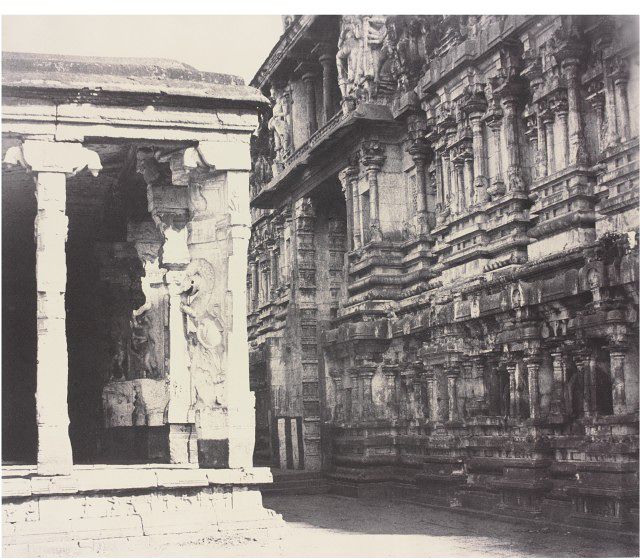