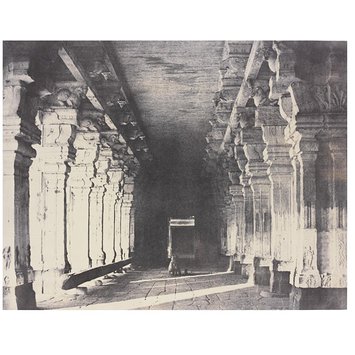 Linnaeus Tripe (1822-1902) documented much of south India as official photographer to the Madras government (1856-1860). His album Photographs of Madura: Part III contains fifteen images of the Great Pagoda of Madura, a famous and celebrated piece of architecture. This photograph shows a Mundapam or munduppum (a pavilion, pillared hall, or 'choultry') within the Pagoda complex. Tripe seems to have been keen on photographing columns (see IS.39:3-1889, for example), and is good at capturing details despite the sharp contrast of light and dark which would have made photography here challenging.

This black and white photograph shows a corridor flanked by large sculpted columns, lit from outside, with shadows across the stone floor. There is a sacred cow in the centre of the passageway.

This photograph was given by Lady Denison in 1889 during the keepership of Caspar Purdon Clarke, Keeper of the Indian Section of the V&A. It was written off in 1937, and rediscovered and re-evaluated in the 1990s. See Dewan p.426 for listings of other copies elsewhere.
This photograph was published as plate II of fifteen in the album Photographs of Madura: Part III 1858, by 'Captain L. Tripe, Government Photographer', published in 1860. It was taken as part of Tripe's remit as the government photographer, which he himself defined broadly, as recording, ‘before they disappear’ buildings, sculptures and inscriptions…' including the picturesque. This was a model for an extensive survey, including tuition of others and experimentation in his own practice. He was funded by the Madras government, but intended selling additional copies of some prints so that his practice could be self-funding.

This photograph was published with the following text (an extract follows):
'The view represents the interior of a Mundapam in the great Pagoda which is said to have been built by Muttu Virappa Nayak, the elder brother of Tirumalai Nayak by whom he was succeeded on the throne' [in the late 16th to early 17th centuries]. 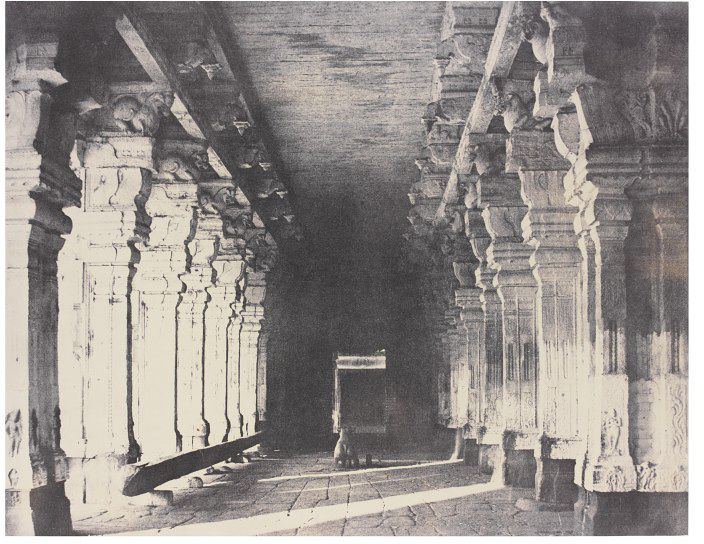