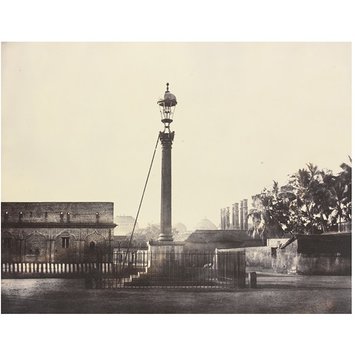 Linnaeus Tripe (1822-1902) documented much of south India as official photographer to the Madras government (1856-1860). This photograph records the monument to John Blackburne, Collector of Madura (1835-1848). The text accompanying the photograph pompously states that 'Mr. Blackburne's efforts to improve the town of Madura cannot be too highly estimated, instead of the confused jumble of houses, in ill ventilated narrow streets, which generally form a native town, the well built houses and fine open thoroughfares of Madura might be imitated with advantage in towns of much higher pretensions to civilisation than hers. In consequence of a judicious prohibition of thatch, all the houses are terraced or tiled and fires thus rendered difficult.' The original entrance to Trimul Naik's palace is on the left. The ten pillars to the right are from the ruined palace of the king's brother, Mithialu Nayak.

This black and white photograph shows a lamp-postsupported by rope or cable in the centre, with a low retangular building to the left and trees and columns to the right.

This photograph was given by Lady Denison in 1889 during the keepership of Caspar Purdon Clarke, Keeper of the Indian Section of the V&A. It was written off in 1937, and rediscovered and re-evaluated in the 1990s. See Dewan p.441 for listings of other copies elsewhere.
This photograph was published as plate IX of nine in the album Photographs of Madura: Part II 1858, by 'Captain L. Tripe, Government Photographer', published in 1860. It was taken as part of Tripe's remit as the government photographer, which he himself defined broadly, as recording, ‘before they disappear’ buildings, sculptures and inscriptions…' including the picturesque. This was a model for an extensive survey, including tuition of others and experimentation in his own practice. He was funded by the Madras government, but intended selling additional copies of some prints so that his practice could be self-funding.

This photograph was published with the following text:
'The Iron column surmounted by a lamp in the view, was erected by subscription in memory of Mr. John Blackburne, Collector of Madura from 1835 to 1848. It is situated at the head of the Great Bazar street.

Mr. Blackburne’s efforts to improve the town of Madura cannot be too highly estimated, instead of the confused jumble of houses, in ill ventilated narrow streets, which generally form a native town, the well built houses and fine open thoroughfares of Madura might be imitated with advantage in towns of much higher pretensions to civilisation than hers. In consequence of a judicious prohibition of thatch, all the houses are terraced or tiled and fires thus rendered difficult. The frequent destruction of whole villages by fire in the neighbourhood shows the necessity of such a precaution.' 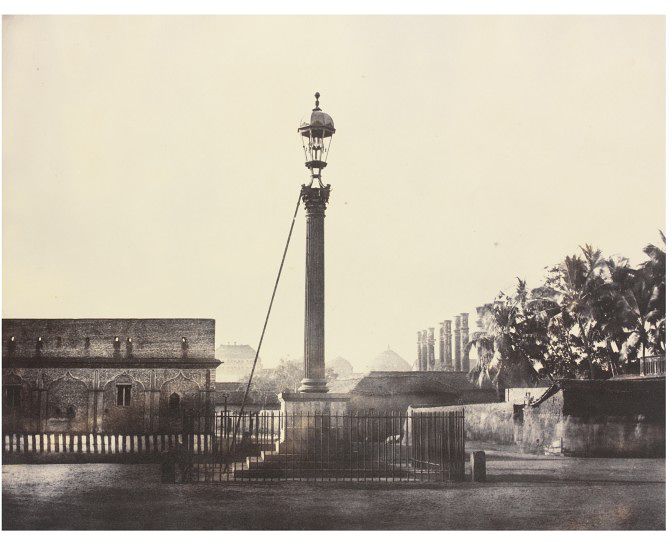