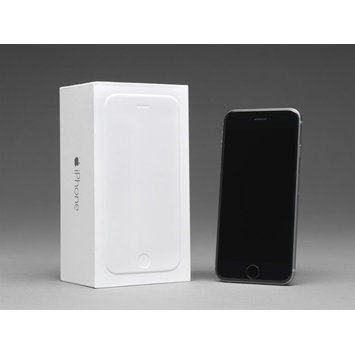 Released along with the iPhone 6 Plus on 9 September 2014, these models have the largest displays of any iPhone to date. The iPhone 6’s screen size across the diagonal is 119 mm (4.7 inches) and the iPhone 6 Plus’ screen is 140 mm (5.5 inches), as well as being the thinnest phone at 6.9 mm that Apple has produced. As with all previous iPhones, the iPhone 6 has a touchscreen and a rear-facing camera, and like all iPhones post version 4, it also features a front-facing camera. The phone has a glass front which for the first time curves around the edges of the display and an aluminium back; this features two plastic strips, known as antenna bands, which allow radio waves to get through the aluminium exterior. The iPhone 6 is available in three finishes gold, silver, and, as with our acquired examples, space grey.

The decision to increase the size of the iPhone was a response to the rise of the phablet, devices between 127 and 152 mm (5 and 6 inches) that straddle the smartphone and tablet market and include successful product lines such as Samsung’s Galaxy Note. These larger- sized smartphones had been taking market share from both Apple’s smaller smartphones and their iPad tablet computers.

To accommodate the larger physical size of the iPhone 6 and 6s, the power button has moved from the top to the side to improve accessibility. Software changes were also introduced including a ‘reachability’ one-handed gesture; double-tapping the home button slides the top half of the screen's contents down to the bottom bringing it within reach of the user’s thumb.

The revised design of the iPhone 6 received considerable criticism as its extreme thinness meant that the rear-facing camera protrudes out from the device. Tom Warren of The Verge noted that in press images on its website Apple removed the camera using Photoshop, to keep the look of the phone ‘streamlined’1. Ian Parker, writing a profile piece for the New Yorker in February 2015, asked Jonathan Ive about the protruding camera; “Ive referred to that decision – without which the phone would be slightly thicker – as ‘a really very pragmatic optimization’. One had to guess at the drama behind the phrase. ‘And, yeah…’ he said.”2 During the iPhone 6’s launch period, there were several stories reported on in the media about iPhone 6 bending when carried in a trouser pocket. Apple responded that they had only received nine complaints about this in the 16 days following its launch, a period in which they sold 10 million phones.3
Despite these criticisms, the iPhone 6 is the product that made Apple the most profitable company to have ever existed, with quarterly profits from October to December 2014 of $18bn. From the iPhone 6’s launch on 19 September 2014, Apple sold around 34,000 phones per hour, every day for three months, with 74.5 million sold in this period alone. Sales increased by 70% in China, the world’s biggest smartphone market, despite costing much more than products designed and manufactured by domestic companies such as Xiaomi.

Apple began manufacturing smartphones in 2007 and when launched The Wall Street Journal, described the iPhone as, “on balance, a beautiful and breakthrough handheld computer” .4 Apple’s ability to make the web truly mobile has been the most influential factor in its continued success.

Mobile telephone, iphone 6 model in space gray. Rectangular with rounded edges, back side is space gray with the apple symbol top centre with a camera and flash top left. There are darker gray lines at running the width at the top and bottom of the phone. The top side of the phone has a black screen with a ear piece at the top centre with a camera to the left. There is a single circular home/ touch id button at the bottom centre of the phone underneath the screen. The bottom edge of the phone has a stereo headphone mini jack socket on the left with a microphone hole to the right of it, a lightning connector charger socket in the middle and 6 small holes for the built in speaker to the right. The top right edge has a small rectangular on/off sleep/wake button and the top left edge has toggle ring/silent switch below this are two rectangular volume up/down switches.

From The Future Starts Here

iPhone
Apple
2015
Above
09
THE SMARTPHONE THAT
NEVER LEAVES OUR SIDE
The smartphone has become an extension of ourselves, something that many of us cannot live without. Beyond the seemingly antiquated function of making calls, we use smartphones to navigate, chat, order food, play games, listen to music, find love and much more. What if that feeling of incompleteness you get when you forget your phone
means that you are, already, a cyborg?
Commercially available product.
Aluminium, plastic, glass and electronics
V&A: NCOL.1062:1-2015 [May 2018] 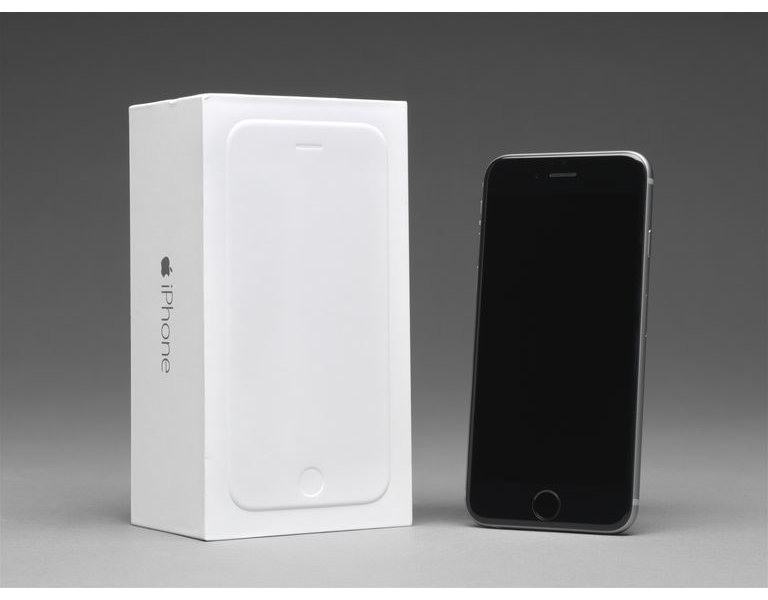