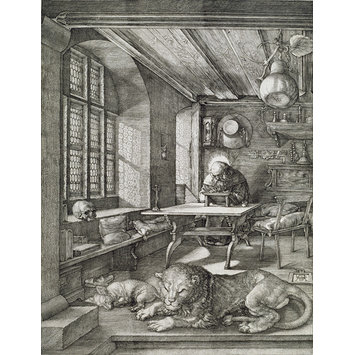 St Jerome in his Study

'St Jerome in is Study' is one of three prints known as Dürer's 'master engravings' and it represents the pinnacle of his achievement in the medium. It is remarkable for its contemplative atmosphere, evocative lighting and the detailed representation of the interior. The realistic items surrounding the saint, including writing implements and devotional objects give the saint a convincing presence. Dürer has composed the print using a rigid mathematical perspective, contributing to the feeling of intellectual and spiritual discipline and demonstrating his own learning.

St Jerome was one of the Church Fathers.He was an ascetic and theologian famous for translating of the bible into Latin and revising existing translations. He is often depicted with a lion in reference to a legend in which he was befriended by a lion after extracting a thorn from it's paw.

Engraving depicting St Jerome writing in his study. The print is full of the physical details of a clerical study including devotional objects, writing implements, books and intimate items such as the saints hat and slippers. Other objects in the sunlit study are an hour glass, skull and a gourd which hangs from the beams of the ceiling. In the foreground are a sleeping lion and a dog.

This print was one of 11 engravings that Dürer produced in the years 1513 and 1514, a period during which he concentrated on engraving to the exclusion of painting and woodcut printing. It is acknowledged as one of the three master engravings that represent the pinnacle of his achievement in the medium.

Historical significance: 'St Jerome in his Study' is acknowledged as one of Dürer's finest engravings and its originality lies in its evocative atmosphere and lighting and the detail given to the interior. Giulia Bartrum points out that the print was particularly popular with Dürer's contemporaries. According to his diary of 1520-21 he gave or sold impressions of it more frequently than any other print while he was in the Netherlands.

The print is full of the physical details of a clerical study including devotional objects, writing implements, books and intimate items such as the saints hat and slippers. Cushions introduce an element of comfort. The realistic objects surrounding the saint give him a convincing presence. Other objects are more symbolic such as the hour glass and skull, signifying the saints mindfulness of mortality, and the lion relating to a legend of the saint.

As well as depicting St Jerome involved in his translations, the print encapsulates the theme of humanist scholarship in a number of ways. St Jerome was a patron saint of the humanists. Dürer has used the composition of the print to explore and demonstrate his own learning on classical form and perspective and the rigidly constructed mathematical perspective contributes to the feeling of intellectual and spiritual discipline. Peter W. Parshall has argued (see Peter W. Parshall 'Albrecht Dürer's St. Jerome in His Study: A Philological Reference' in 'The Art Bulletin', Vol. 53, No. 3 (Sep., 1971), pp. 303-305) that the gourd depicted hanging from the ceiling is a reference to one of St Jerome's famous scholarly debates over a biblical passage (the book of Jonah 4:6) and symbolises the saints intellectual rigour.

St Jerome is one of the Church Fathers. He was an ascetic and theologian famous for translating of the bible into Latin and revising existing translations. He is often depicted with a lion in reference to a legend in which he was befriended by a lion after extracting a thorn from it's paw.

St Jerome appears more frequently in Dürer's work than any other saint. He produced six prints of St Jerome during his career (including his first signed wood block). He also depicted St Jerome in a landscape for a small devotional panel painting (now in the National Gallery, London). Dürer's interest in St Jerome reflects the increasing veneration which was given to the Church Fathers during the 15th century. The date of this print coincides with the year of publication of the translation into German of St Jerome's biography by Dürer's friend Lazarus Spengler

'St Jerome in his Study', 1514, 'Knight, Death and the Devil', 1513, and 'Melancholia I', 1514 are generally referred to as Dürer's master engravings. The three prints are comparable in size, the complexity of their iconography and the high quality of their execution, but do not have any direct compositional relationship and there is no evidence that Dürer treated them as a set when he sold or gave them (Bartrum, Guilia. 'Albrecht Dürer and his Legacy'. The British Museum Press, 2002. p 185). Their thematic connections, however, have suggested various collective interpretations. Friedrich Lippmann saw a correspondence with the scholastic classification of the virtues as moral, theological and intellectual with 'Knight, Death and the Devil' representing the active, practical Christian life, 'St Jerome in his Study' the spiritual life of contemplation and 'Melancholia I', the life of secular intellect and genius (Panofsky, Erwin. 'The Life and Art of Albrecht Dürer'. Princeton: Princeton University press, 1955. p151). While 'Knight, Death and the Devil' and 'St Jerome in his Study' have been seen as a comparison between the active and contemplative Christian lives, 'St Jerome in his Study' and 'Melancholia I' have also been paired as a contrast between life in the service of God and life in competition with God (Panofsky p 156).

St Jerome in His Study by Albrecht Dürer; engraving; 1514

Jerome was a 4th-century scholar whose Latin translation of the Bible became the standard text.

Renaissance artists often depicted him in surroundings that evoked a contemporary study. On the dish [C.2148-1910], Jerome's books rest on a revolving bookstand, while Dürer's print includes writing implements pinned to the wall. The Italian critic Vasari praised this detail, and the naturalistic effect of the sun streaming through glass.

Signed with the artist's monogram 'AD' 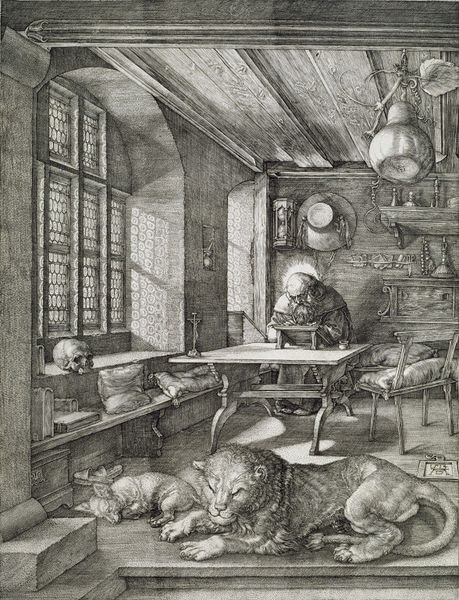