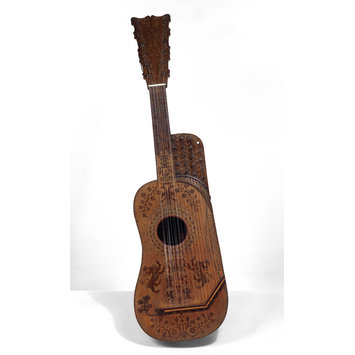 This unusual guitar was made by Rafael Vallejo between 1789 and 1792 for the instrument collection of King Carlos IV of Spain (reigned 1788 - 1808). This is the only known instrument built by this otherwise unrecorded luthier, but Carlos IV, who is best known for his patronage of the artist Francisco Goya (1746 - 1828), was a keen encourager of the arts, despite his turbulent reign which was blighted by wars that followed the French Revolution.

Vallejo's guitar is fitted with six courses of double strings, which would have been normal for a guitar by about 1780, and an extra ten treble courses, like the Italian chitarra-salterio (Psaltery guitar), 'Russian theorbo' and Parisian guitare-multicorde.

"A large instrument with extra treble strings of wire. Back of rosewood decorated with a stylistic sun in various woods. Deep sides of walnut, decorated with inlaud fillets of light wood in wispy floral scrolls. Belly of a single piece of pine, inlaid with rosewood in geometrical, heraldic floral motifs and the inscription given above. Rose missing. The back of the short neck is decorated with a chequer pattern in various woods, The front of the neck is decorated to match the belly and has five brass frets. The wedge-shaped head has twelve rear pegs for six double courses running to a Spanish bridge on the belly.

In addition ten double courses of wire strings run across the treble side of the belly to attachment at an oblique extension of the bridge. They are tuned by twenty rear pegs geld in a flat and curved extesion board fixed to the shoulder of the belly. The wires pass from these pegs under an iron wire bridge and over a curved wooden but which follows the contour of the side.

This wire strings are evidently intended to be tuned diatonically and struck with the fingers of the right hand in melodies accompanied by simple chords fingered on the gut strings and struck with the thumb.
Engel, p. 254. Other kind of instrument with diatonic strings mounted across the treble side of the belly include the seventeenth-century polyphant and the late eighteenth-century “Russian theorbo”. They have been recorded on the guitar in Italy, in an eighteenth-century chitarra-salterio (‘psaltery-guitar’); also in a Parisian guitar-multicorde of about 1830, here with the expressed object of circumventing the comparative difficulty of playing on the higher frets."

'Soy del Rey Doncarlos IIII Qe Ds Ge Ms As'
"I belong to King Carlos IV (reigned 1788 - 1808) whom God preserve for many years"
This inscription is inlaid on the soundboard of the guitar.

Instrument cleaned and bridge repaired, in the Conservation department. 11. 63.
Restrung, seven new pegs and tail pin made by William Hill in 1964
When this guitar was sent out on loan to the Buxton Museum in March 1901, it was noted that three pegs were missing. See RP 7399/1901

An experienced luthier and musicologist from Granada came to view the guitar in February 2016 and noted that the pegs are unmarked in such a way to indicate that this guitar was never played. He also noted that there is a spelling difference between the same word written on the label inside ('hizo') and the marquetry on the reverse ('yzo'). He was permitted to insert a mirror into the body of the guitar to see the reverse side of the soundboard and a series of religious paintings were discovered, one of whom is named as a depiction of the Archangel Raphael. The placement of the paintings is very unusual as this is a part of the guitar that is not designed to be seen.

Guitar made by Rafael Vallejo for the instrument collection of King Carlos IV of Spain. Spanish, ca. 1789-1792. 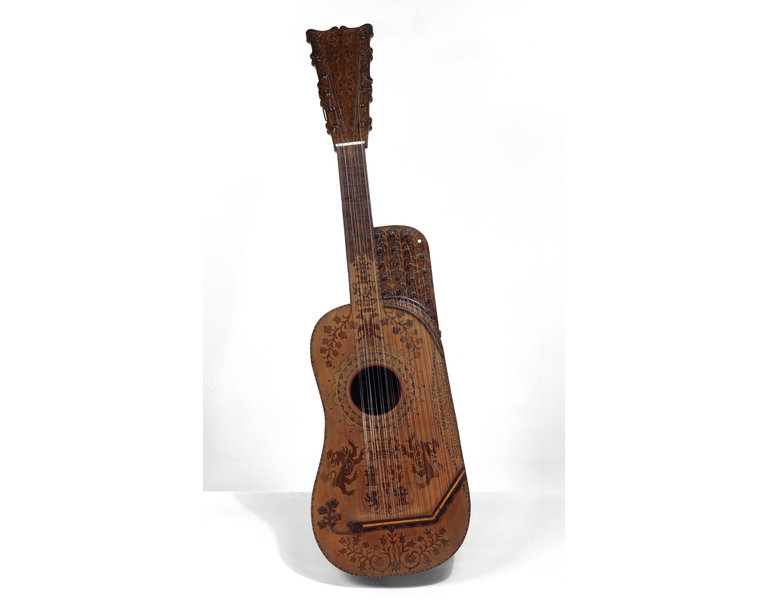