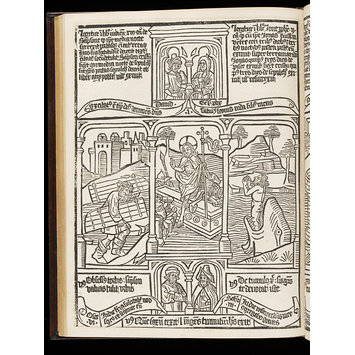 In the central horizontal compartment a scene from the life of Christ, The Resurrection, is flanked on each side by a scene from the Old Testament: Samson carrying away the gates of Gaza on the left, and Jonas and the Whale on the right.

In the centres of the top and bottom registers, four prophets wearing elaborate costumes and head-dresses sit beneath architectural archways (two above and two below). Speech scrolls contain quotations from the prophets. Clockwise from top left they are David, a quote from Genesis, Sophonias and Osee.

Surrounded by many people Samson carries away the gates of the city
Titulus, below left image in central horizontal compartment

Jesus, whom the huge stone covered, leaves the tomb
Titulus, bottom centre, below prophets but referring to central image of central horizontal compartment

This man denotes you rising out of the tomb O Christ
Titulus, below right image in central horizontal compartment

Genesis xlix / Judah is a lion cub; my son
In frame below prophet /
Scroll coming from top right prophet

Osee vi / On the third day he shall raise up; we shall know and follow him
Scroll coming from bottom left prophet

According to the Book of Jonas the Prophet ii, II, when Jonas had been in the belly of the sea-beast for three days and three nights, the fish threw him up on dry land. Jonas, who came out of the fish after three days, signifies Christ, who after three days left the tomb, that is to say, rose from the dead
Top right

From Henry, Avril. Biblia Pauperum. Scolar, 1987, p. 106.
The Resurrection (Matthew xxviii, 1-10)
The major theme is the overcoming of adversity followed by emergence from imprisonment. The minor theme is ascent to God. Samson is a type of Christ's single-handed power. Both escape from many enemies (Christ's in hell and on earth around the tomb); both move from metaphorical as well as literal darkness; both force gates; Samson's climbing the mountain, on which we see his feet carefully set, prefigures the Ascension.
There is a mountain too behind Jonas, where we might expect to see Nineve as a kind of visual antithesis to Gaza. This mountain, traditional retreat for prayer, suggests Jonas's personal goal rather than his immediate destination as a prophet: it complements his gesture of prayer. In the design of the whole page, Samson's ascent and Jonas's gesture lead to Christ. Jonas escapes not by human strength but by prayer, resulting in God's 'speaking to the fish' so that he throws him up. Christ, echoing both Samson and Jonas, escapes his own and his father's power. Christ is called the lion-cub because, the Bestiary tells us, a new-born lion sleeps for three days until woken to full life by the roaring of his sire. That Jonas is thrown up suggests not only that hell could not contain Christ, but also that his mission does not end with the Resurrection: it continues, bringing us, as Jonas brought to Ninivites, to repentance. Jonas's nakedness even underlines the special nature of Christ's risen body, wounded but unbleeding, newly stripped of human weakness. The uncomprehending group of soldiers round the tomb represents their blindness to Christ, whose brightness they cannot tolerate.
The two lower prophecies point not to the manner but to the meaning of the Resurrection. Spiritual death, to which mankind has been subject since the Fall, is conquered: Christ shows us that physical death may be overcome at the general resurrection. Such is the power of this double victory that all races will then unite.

Each page in a blockbook was printed from a single woodblock, a method that was used for works in high demand. Although this book is called a 'bible for the poor', the complex format - with scenes from Christ's life paralleled by ones from the Old Testament, along with an explanatory text - suggests an educated, well-off readership. 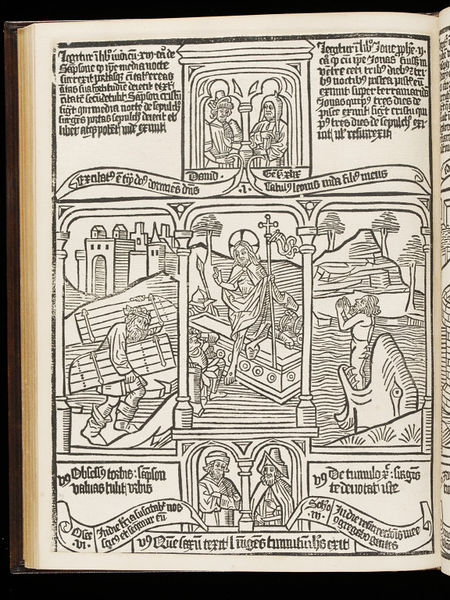