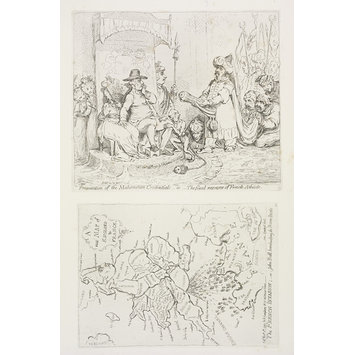 Two plates from an album containing 45 numbered prints on wove paper, the majority printed two per page, recto only. Numbered 31 and 32 respectively, number 31 depicts George III and Charlotte of Mecklenburg-Strelitz, seated on a throne, receiving with some degree of shock, a deputation from Turkey. The Turkish emissary is holding a document before him, resembling a large phallus with two heavy pendant seals dangling at the back. Cowering behind this figure are Charles James Fox and Richard Brinsley Sheridan, holding the end of the emissary's long, elaborate cloak. They are both wearing bonnets-rouges decorated with crescents. Behind them, Joseph Priestley bows sycophantically towards the King and Queen in front of a group of Turkish onlookers, bearing flags and holding spears in the background. William Pitt is depicted as a naked person of diminutive size, grasping at the King's leg in terror and urinating. He is chained around the waist, attached to a heavy crown in the foreground. The King himself appears petrified, biting his nails and stretching his arm protectively across the Queen, who hides her face behind a fan. Her face betrays a look of excitement and three of the elder princesses peep out from behind the throne to the left of the Queen, similarly titillated. Lettered with titles, artist's initials, and the original publisher's name and address.

The second print on the same page is entitled 'The French Invasion' and depicts a comic map of England and Wales with most of the counties inscribed, the outline of the Scottish borders and the east coast of Ireland, the Isle of Mann, the north French coast as far as Paris, stretching east to include the Belgian coast and the port city of Ostend. Between Yorkshire and Northumberland is the face of George III, with Northumberland shaped into a fool's cap, and England representing his body. The knee is formed by Norfolk, the shin is Essex, and the foot, Kent. On the south coast, the junction of Sussex and Hampshire becomes the point of excretion, with the caption 'British Declaration' inscribed amidst the faeces raining down on the French coast and a flotilla of ships in the Channel. Lettered with title, 'John Schoebert fecit', and the original publisher's name and address. 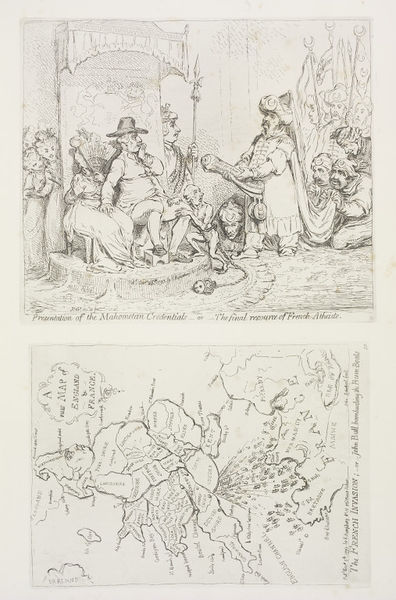