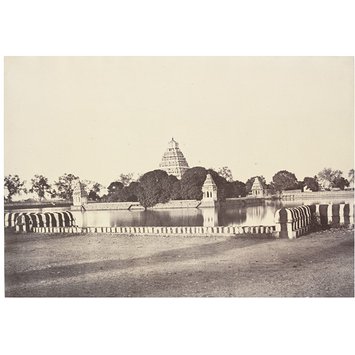 Linnaeus Tripe (1822–1902) documented much of south India as official photographer to the Madras government (1856-1860). This photograph shows the Teppacolum. The text published with this image states 'In the centre is an island containing an ornamental Mundapam or Pavilion. Into this the images of the god Sundareshwara and his consort Minakshi, are brought and placed at a certain festival early in each year. They previously take their pleasure by being rowed or punted about the tank (kulam) in a gaily decorated raft (teppam). The tank was built by Tirumalai Nayak (ruled 1623–59)'. Tripe took two very similar views of the Teppacolum, intending them to be used together in a stereoscopic viewer to give a 3-dimensional effect.

This photograph shows the Teppacolum, a large temple in the middle of a lake hidden behind some trees. Long shadows mark the lawn in the foreground, and the walls surrounding the lake are stripy.

This photograph was given by Lady Denison in 1889 during the keepership of Caspar Purdon Clarke, Keeper of the Indian Section of the V&A. It was written off in 1937, and rediscovered and re-evaluated in the 1990s. See Dewan p.453 for listings of other copies elsewhere.
This photograph was published as plate IV of ten in the album Photographs of Madura: Part I 1858, by 'Captain L. Tripe, Government Photographer', published in 1860. It was taken as part of Tripe's remit as the government photographer, which he himself defined broadly, as recording, ‘before they disappear’ buildings, sculptures and inscriptions…' including the picturesque. This was a model for an extensive survey, including tuition of others and experimentation in his own practice. He was funded by the Madras government, but intended selling additional copies of some prints so that his practice could be self-funding.

This photograph was published with the following text:
'A large tank 2 miles East of the Town [Madura]; it is about 300 yards square. The sides are of cut stones throughout, with flights of steps at intervals. In the centre is an island containing an ornamental Mundapam or Pavilion. Into this the images of the god Sundareshwara and his consort Minakshi, are brought and placed at a certain festival early in each year. They previously take their pleasure by being rowed or punted about the tank (kulam) in a gaily decorated raft (teppam). The tank was built by Tirumalai Nayak (ruled 1623–59), who is said to have expended upon it a lakh (100,000) of Pons [I pon=1/16th of a rupee], and to have given land with a rental of 10,000 Pons, for the expenses of the annual festival. It is useless to speculate on the real cost of the work; forced labour having been in all probability largely called into play. The tank is supplied from a channel taken off from the Vaigai river.' 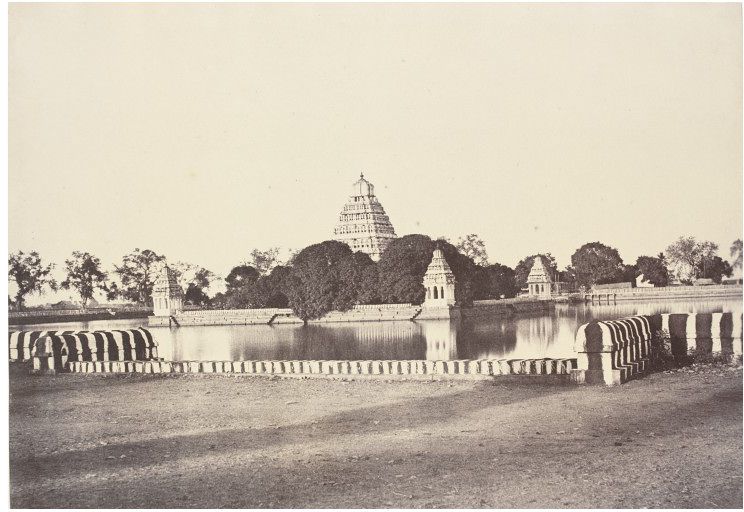