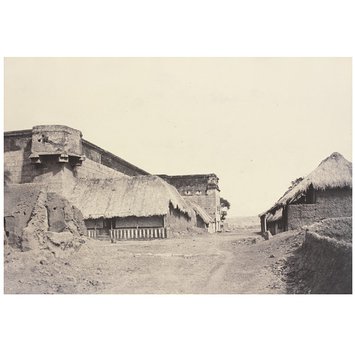 View of the N. E. angle of the Tirambur Pagoda

Linnaeus Tripe (1822–1902) documented much of south India as official photographer to the Madras government (1856–1860). In the original letterpress that accompanies the previous plate (II), the history of the pagoda is highlighted. In 1755 English troops fought against Madurai, and so the Governor abandoned the city and took refuge in the Teramboor pagoda. After conquering Madurai, the troops then attacked the pagoda at Teramboor. Without weapons or ladders they burned down the gates of the pagoda and plundered it. Brass images of the temple deities were stolen, to the anger of local people, who attacked the troops as they walked from Madurai to Trichinopoly. This photograph hints at how the town of Teramboor that once surrounded the pagoda has almost disappeared.

This photograph shows the gate of a pagoda in the centre distance, with a straw-roofed building to the right, and the edge of the temple enclosure is on the left.

This photograph was given by Lady Denison in 1889 during the keepership of Caspar Purdon Clarke, Keeper of the Indian Section of the V&A. It was written off in 1937, and rediscovered and re-evaluated in the 1990s. See Dewan p.407 for listings of other copies elsewhere.
This photograph was published as plate I of ten in the album Photographs of Madura: Part I 1858, by 'Captain L. Tripe, Government Photographer', published in 1860. It was taken as part of Tripe's remit as the government photographer, which he himself defined broadly, as recording, ‘before they disappear’ buildings, sculptures and inscriptions…' including the picturesque. This was a model for an extensive survey, including tuition of others and experimentation in his own practice. He was funded by the Madras government, but intended selling additional copies of some prints so that his practice could be self-funding.

This photograph was published with the following text:
'...The projecting bastion is peculiar and rarely seen. The few houses under the Pagoda walls are all that remain of the former town of Tirumbur.'

Photograph, 19th century; No. III 'View of the N. E. angle of the Tirambur Pagoda', from the photograph album by Capt. Linnaeus Tripe, 'Photographs of Madura: Part 1'; South India, 1858 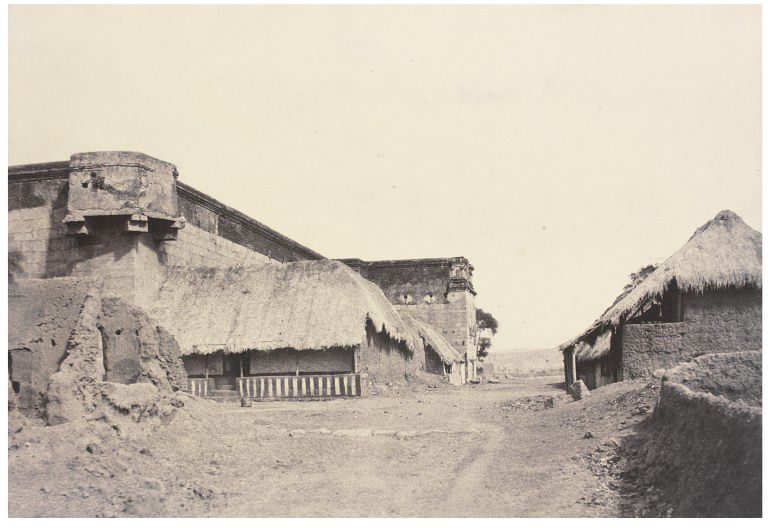