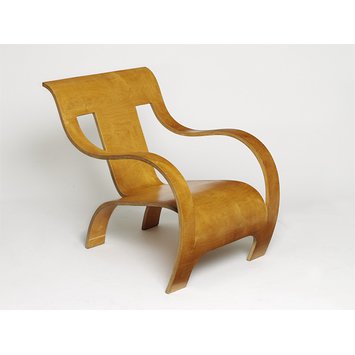 This chair's very clever, simple design allows it to be made from a single sheet of plywood. Designed in 1934 by Gerald Summers and manufactured by his London company, The Makers of Simple Furniture, the chair is made from a plywood sheet consisting of 13 layers of cross-grained veneer. The sheet was first cut with four straight lines, which outlined the position and width of the arms and back legs. While the glue between the plys was still wet, the sheet was then pressed in a wooden mould for eight hours. The mould articulated the curve of the chair's legs and arms, leaving only the front legs to be cut out after the moulding process was finished.

The construction of the chair from a single piece of moulded board gives it a highly distinctive visual and structural clarity. Summers was one of a group of European designers working in the early 1930s to push the formal and structural limits of new furniture materials such as plywood.

Curvilinear shaped armchair formed of a stack of moulded 13-ply birch plywood. The veneers are either 1mm or 2mm thick, with the thickness alternating at each layer.

Reg. No 791116
On stamped metal tablet held by two pins behind the front stretcher.

Summers' own furniture company, Makers of Simple Furniture Ltd. (founded in 1931/32), produced only 120 examples of this chair. Despite its ingenious construction, production costs of the chair and subsequently the sales price were quite high (higher than the then popular Scandinavian designs).

Historical significance: This chair is an example of the ideal unity of material, production and form. The simple construction dispenses with connectors and produces almost no off-cuts, using one single sheet of plywood. Following a simple pattern which separates the back legs from the back and armrests, the segments were bent in different directions resulting in an organically shaped armchair that is comfortable even without a cushion.

Gerald Summers’ interest in the use of plywood in furniture design began after his return to London following his service in the British Army in the First World War. Like many of his contemporaries he was interested in improving conditions in crowded cities, material honesty and simplicity of design, and in the use of modern materials and techniques of production. Until this period plywood had been used mostly to make packing cases and the hidden structural parts of furniture. The interest of many designers in the potential applications of industry and modern materials in the improvement of peoples’ lives meant that mouldable plywood became increasingly prominent in furniture design.

Summers worked for Marconi’s Wireless Telegraph Company, a progressive communications firm, from 1926-1933, where he met his future wife, Marjorie Butcher. His suggestion to her that he make simple plywood furniture of his own design for her new flat was the beginning of a fruitful partnership between the pair. In 1929 they began renting a basement flat on Fitzroy Street, near the British Museum, which they used as a home and workshop. Their first sales were to Mr. Rose of Rose and Blairman, a women’s clothing wholesaler, who had mistaken their workshop for a showroom after spotting their finished designs through the window.

The pair’s company, Makers of Simple Furniture, was founded in 1931/32. Their furniture was sold through major department stores, such as Heal’s and Harrods in the UK and James Pendleton in New York. They also supplied furnishings for Jack Pritchard’s Isokon Building, located at Lawn Road, Hampstead, which during the 1930s could boast Bauhaus instructors Marcel Breuer, Walter Gropius and László Moholy-Nagy as residents.

Following their initial successes Makers of Simple Furniture moved to a new premises at nearby Charlotte Street, where their workshop employed a dozen craftsmen. Their designs were usually made to order which Summers felt gave the firm greater flexibility in meeting individual clients’ requirements, but which also made their prices prohibitively expensive to most people. Hand-crafting their furniture, rather than industrial manufacture, was a legacy of Summers’ involvement in the Design and Industry Association, a group formed from the Arts and Crafts Movement, whose principles advocated the use of modern industry and technology in improving the design of household objects.

This armchair is ingeniously made without braces from a single sheet of moulded plywood. A story holds that an American buyer, unconvinced of the design’s strength, insisted that environmental tests be conducted to prove its durability. An example of the chair was soaked in water and left in a warm, damp room for a number of weeks to prove the plys would not separate. The legacy of Summers’ attempts to create single-piece furniture can be seen in 1960s plastic furniture design, such as Verner Panton’s stacking chair (museum no. CIRC.73-1969, CIRC.74-1969) or Vico Magistretti’s Selene chair (CIRC.280-1970).

The Makers of Simple Furniture closed in 1940 after the start of the Second World War meant that supplies of specialist aeroplane plywood became unavailable.

At the same time that Alvar Aalto was
experimenting with plywood in Helsinki,
the London designer Gerald Summers
was also investigating the flexibility of
the material. Summers’s heavy armchair
pushes the idea of a moulded seat to its
full conclusion. The entire chair was
made as a single piece of plywood. Cuts
in the veneer formed the legs and arms
during moulding.

For this chair, 13 veneer sheets were stacked, each sheet with its grain running at a perpendicular angle to the next. Cuts were made for the arms and back legs, then glue spread between each layer. The stack of sheets was pressed between a two-part wooden mould for eight hours. Finally, the front legs were cut out from the fully moulded board. [01/12/2012]

13 veneer sheets were stacked, each sheet with its grain running at a perpendicular angle to the next. Cuts were made for the arms and back legs, then glue spread between each layer. The stack of sheets was pressed between a two-part wooden mould for eight hours. Finally, the front legs were cut out from the fully moulded board.

Attribution note: small production of about 120 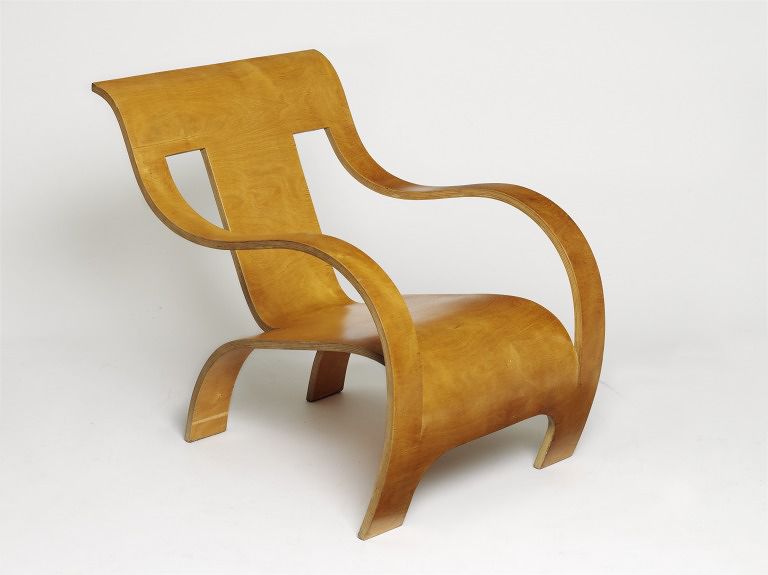